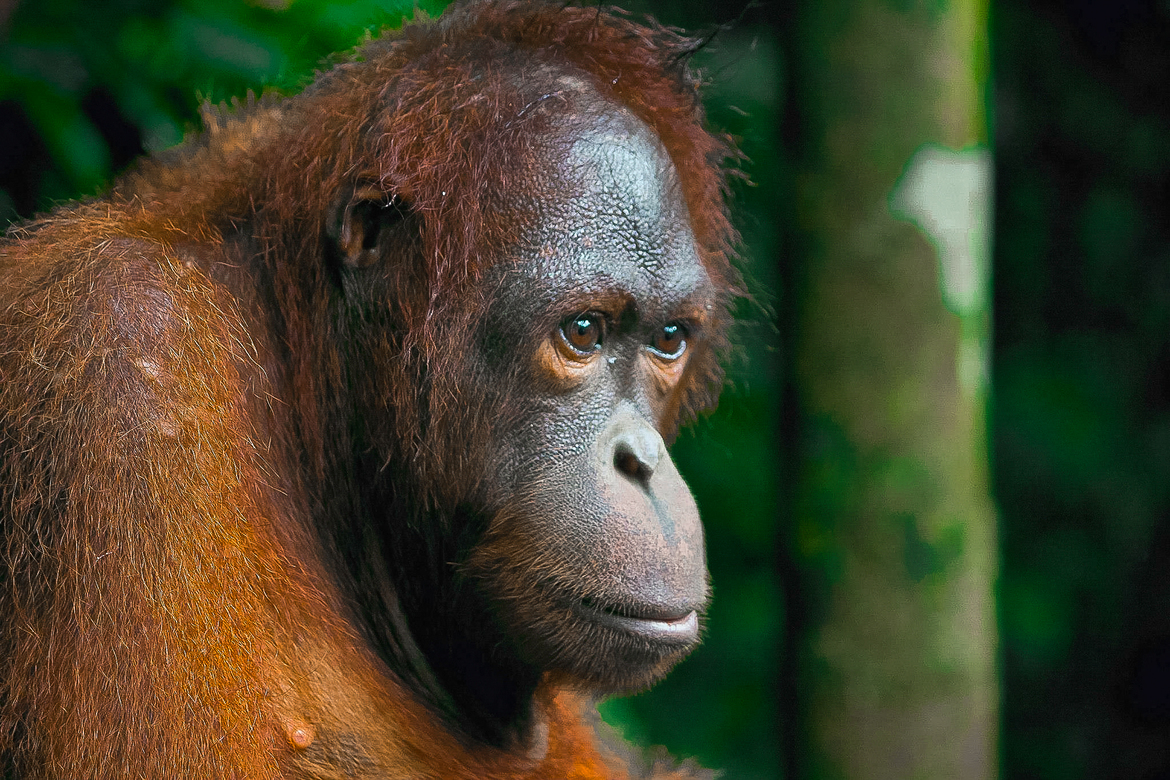 On my last trip to Borneo I was lucky enough to spend some time at the Sepilok Orangutang Rehabilitation centre, located in the state of Sabah. The protected reserve is 43 square kilometres and is home to 60-80 free ranging orangutans.

The first feeding platform where the majority of sightings occur was crowded, so I decided to continue on in the hope of finding some peace and quiet. Around 200 meters down the path I encountered a small group of people huddling as close to the edge of the path as possible. It didn't take long for me to realise what it was, the bright orange juxtaposed elegantly against the dark green lush rainforest. I had to quickly change lenses from a telephoto zoom to a 17-40mm lenses used in portraiture, hoping I could get close enough.

I chose to shoot the orangutan as tight as possible with a relatively low aperture in the hope of capturing all the detail and highlights of the great apes upper body, while opposing the bright clear orange with the dark obscure green surroundings. It was truly amazing to watch one of the earth’s most critically endangered species sit a few feet away from us, seemingly oblivious to our existence.

Orangutans are the closest related species to humans with 97% of our DNA in common, as demonstrated through the human like nature and position of the ape in this photograph. A truly remarkable species that unfortunately faces almost certain extinction within the next 10 years due to large scale habitat destruction from logging, an increase in wildfires induced through Global warming decreasing the monsoon seasons and creating lengthy drought periods, and the development of palm oil plantations that replace the rainforest and all its resources, leaving the apes to starve to death. Another relatively new threat is poaching and the illegal animal trade. Mothers are killed for their meat, and their babies taken to be sold and kept in unnatural disgraceful conditions which often result in death.

Fortunately there are centres like the one in Sepilok that provide the orangutan a safe refuge and slim chance at survival. We all need to become more informed about the products we buy and whether they are ecologically sustainable or not. The biggest threat is the palm oil industry. Palm oil is used in everything from snack foods to soaps and found in over half of all packaged items on our supermarket shelves.

My hope is that this photograph helps to spread information relating to the orangutan species, the dangers they face, and what needs to be done to prevent extinction.

The purpose of my photography is to create meaning by drawing emotion and hopefully make a difference.

Some of my earliest and best memories are those with a camera, searching the backyard for creatures to photograph. As I grew older I slowly became more and more interested in both wildlife and wildlife photography. I started purchasing wildlife and photography magazines, analysing the photos and trying to discover just what it was that separated certain photos from the rest. The lighting, contrast, exposure, and shutter speed are all very important, but not what make a photo exceptional. The photos that stood out to me as exceptional were more than just photos. They were more than an assortment of different lines, shapes and colours. They had meaning and purpose; they told a story that places you in the photographer’s shoes and gives you a glimpse of what it’s like to be there in that moment. The difficulty, the journey, the rarity, and the process taken are all presented before you. This is what I see as contemporary photography. Not just the photograph itself, but the motives, meaning and purpose behind each click of the shutter.

I'm Coming Your Way!
See Primates in the Wild
Learn More
Conservation in Asia
Learn More
Browse Past Photos
Follow Us On: