How to Photograph Soaring Monarch Butterflies

The image of hundreds of monarchs soaring in the air is definitely one of the most desired and coveted on any monarch migration photo adventure. At first glimpse, it may seem like these must all be “lucky” shots, just hoping for the focus and composition to line up perfectly.  Well, that’s sorta correct.

There is indeed some luck involved, but through the steps below, you’ll see that you can actually stack the deck considerably in your favor so that you are almost assured to get a shot like this if monarchs take to the wing in such numbers (which usually happens on warmer days in the monarch colonies). 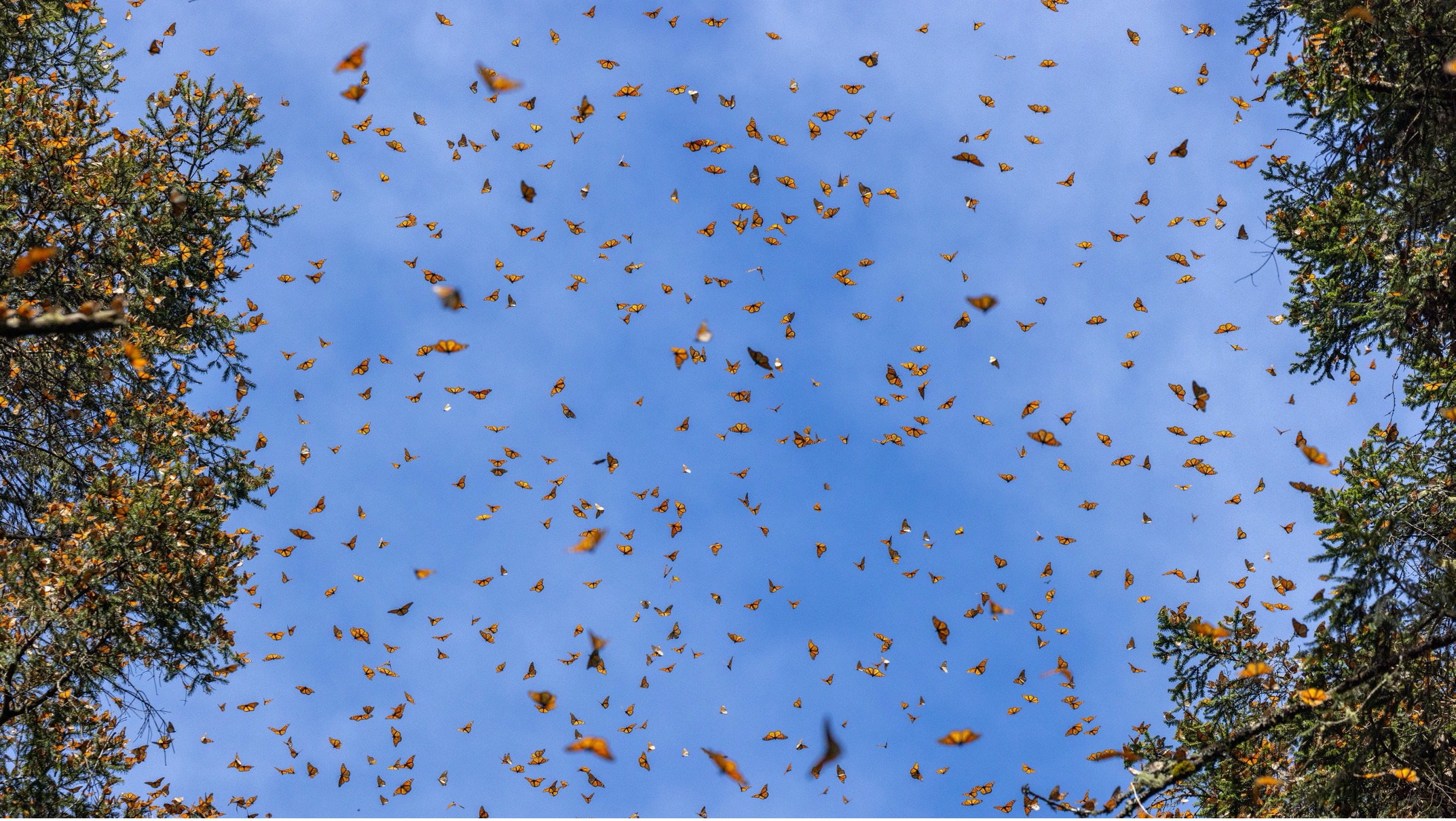 Use a medium wide-angle lens or zoom setting

One may think that you want to be shooting as wide as possible to get a photo like this.  However, it’s actually not the case.  You want to have a little bit of zoom telephoto working for you so that you can fill the frame with the butterflies.  This translates to something in and around a 40-100mm focal length, or a 2-4x zoom on a point and shoot.

The exact trees the monarchs are soaring from (and overall photo composition) will dictate exactly how much telephoto zoom you need, but this range is a pretty good approximation.

Ensure a fast shutter speed and a high frame rate

You will absolutely want to freeze motion in these shots, and the fast the better.  Since you are photographing into a bright sky, you can actually get away with 1/1200 or 1/1600 pretty easily, without needing wildly high ISOs.  Aim for at least 1/1000th of a second and preferably 1/1600th for maximum sharpness.

You’ll also want to have a fast “drive mode” enabled in your camera.  This is typically found in a rather accessible area of your camera, often as a button or toggle switch, and also in your back-of-camera menu. If your drive mode is set on “single” by default, switch it to one of the faster drive modes, denoted by stacked photos. The fastest drive mode may have an “H” next to the stack and can often yield 10+ photos per second–this is what we want! 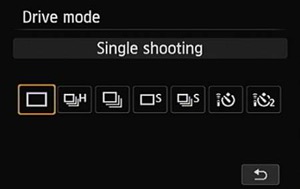 Because you’ll be photographing monarchs at a variety of depths…perhaps many, many feet from one another, you want to set a wide depth of field to get as many in focus as possible.

I’d recommend starting at f/8, but seeing if you can push it to f/11 or even f/16. Because this affects how much light can enter your camera, too high of an f/number may require a high ISO or even reducing your shutter speed. This is where the fine tuning comes in, as well as your personal preference and tolerance. I personally feel that f/8 or f/11 is about the right balance.

Set your camera on manual focus

Here’s the odd part…you aren’t actually going to focus on the butterflies or even a nearby tree to “lock” focus in.  What you do here is use manual focus and manually dial the focus ring until you are noticing the closer monarchs coming into focus.  Don’t worry about all of the monarchs, and you should sacrifice focus on the back/distant monarchs in favor of good focus on the closest ones. This way, the biggest monarchs in your frame appear in solid focus.

Another strategy is to actually focus slightly closer than the closer monarchs so that you may “get lucky” and photograph a much closer, errant monarch (or monarchs), that flies through the frame. This results in a very large monarch in great focus in your frame, but it’s hard to do and requires you to take many, many photos. (and even in the one below, you can see the closest isn’t quite in tack-sharp focus) 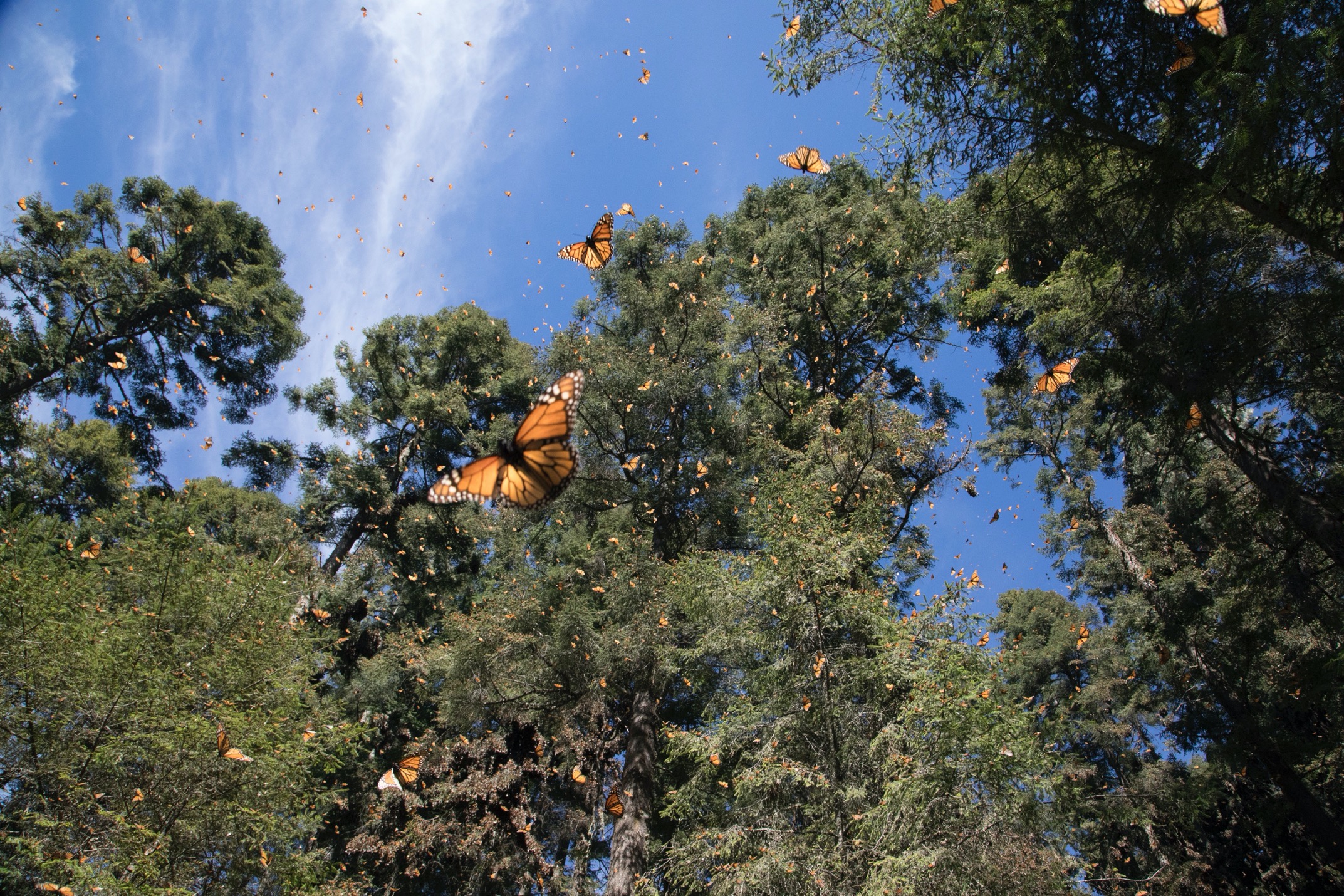 This is where some luck comes in, as the exact monarch composition is going to differ wildly from one fraction of a second to the next. They are rather erratic butterflies, so hoping you get the best shot within just a few photos isn’t putting in enough work :).  When monarchs are at peak abundance in the air, I am prone to taking 30, 50, 100 photos at a time.  Sure, I have to go through them later, but I can tell you after 20 years of taking flying monarch photos, there are always a couple photos that stand head and shoulders above the rest because of the bit of luck I had in a specific moment. But remember, I’m stacking the deck in my favor through volume of photos here :).

Seeking variations is always advisable when in front of glorious wildlife spectacles. In this case, I highly recommend experimenting with composition and whether any other elements are in the photo like trees or branches. Sometimes these auxiliary components are nice and other times it’s best to just have a sky full of monarchs. 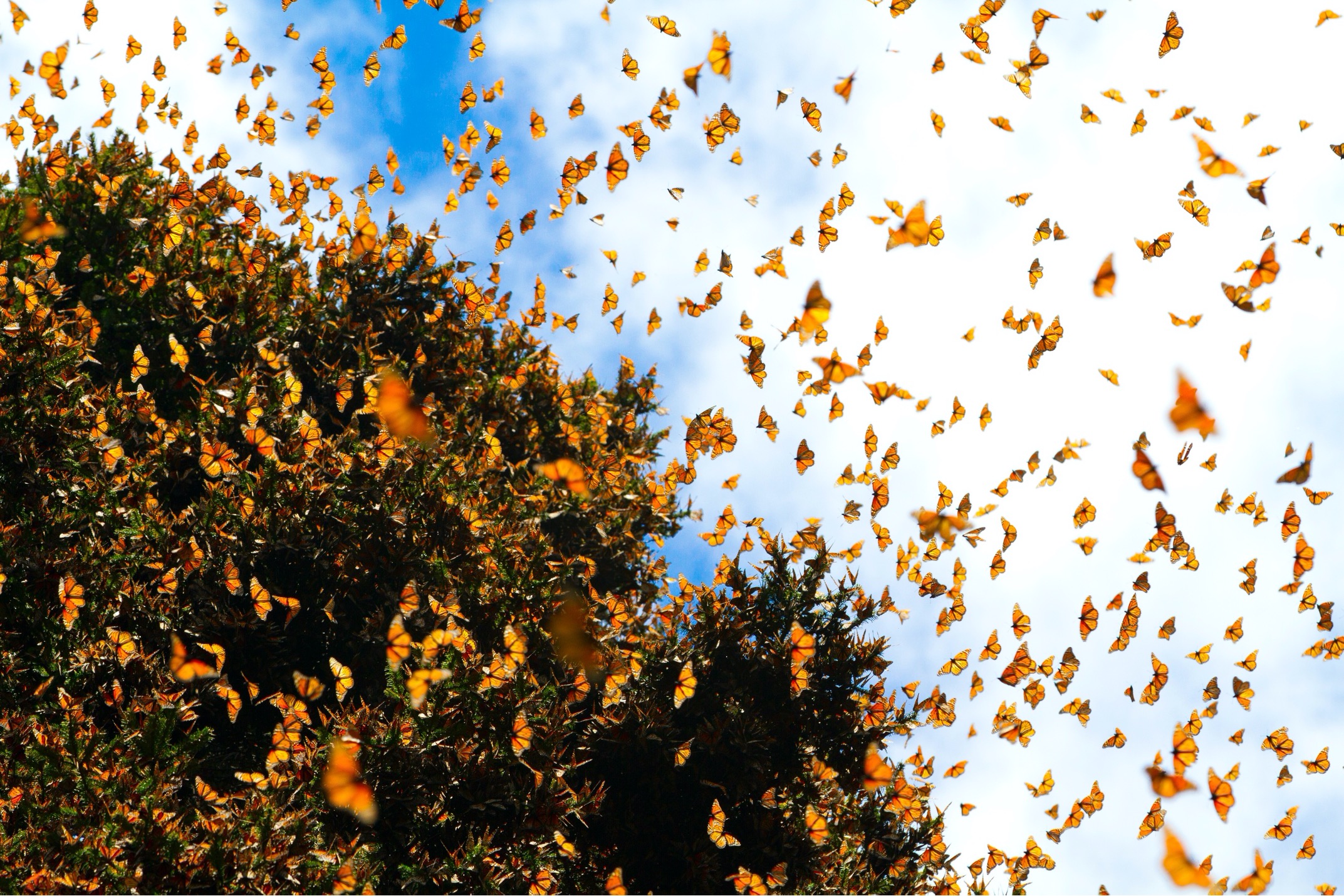 Frankly, most of the variation you’re going to have here will come from the specific monarch concentration by just holding the shutter down and taking dozens of photos in a row as monarchs are at peak activity. 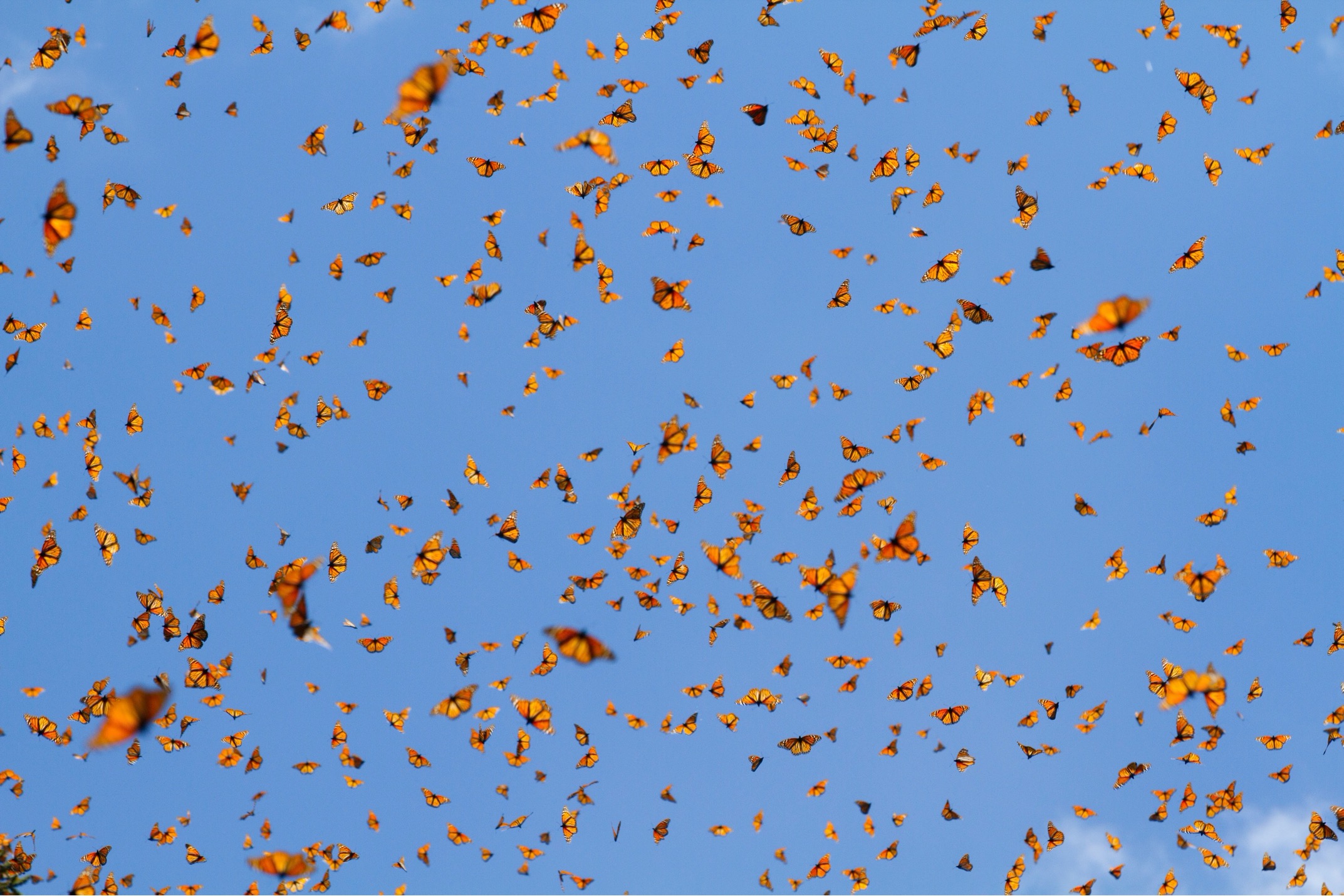 And there you go!  A step-by-step guide for capturing the brilliance of monarchs soaring through the air during the annual monarch migration phenomenon in Mexico. I hope you are reading this in preparation for an upcoming monarch photo trip, as you are certainly in for the time of your life.  Maybe I’ll see you out there!

Pro Tips for Amazing Photography during an African Safari

Shooting in Manual + Auto ISO Has Changed my Photography