When it comes to the most enthralling, massive wildlife spectacles on earth, the great wildebeest migration across the plains of the Serengeti and Maasai Mara has to be near the top of the list.

If you’re headed to Kenya or Tanzania (or both Kenya AND Tanzania!) for a migration photo safari, be sure to come prepared with these tips and tricks for maximizing your photo ops as it pertains to the migration specifically.

Showcasing the enormity of herds of animals can be trickier than you’d think.  How do you show a decent number of animals, while portraying the vivid wilderness, all while taking a captivating photo that is a beauty to look at?

On the surface you might think, well, I just need to photograph loads of wildebeest, right?  That’s not necessarily incorrect, but just looking at it one way may not emphasize the scale and depth of the migration as best as possible.

Take a look at the below photo…it documents it well, and it is impressive, but it is a fantastic photo you’re likely to hang on your wall?  Not really. 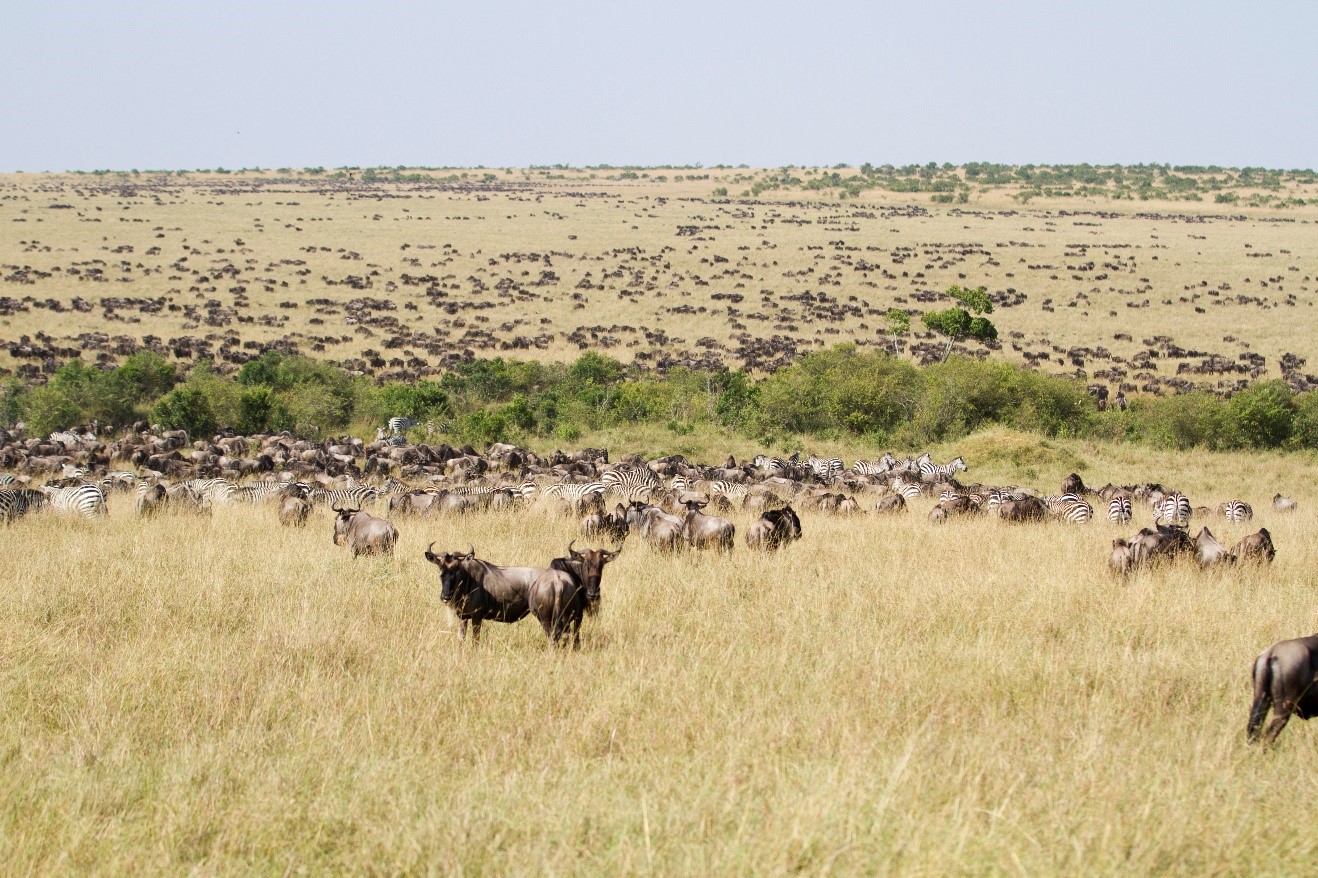 The best technique I’ve found over the years is to pay attention to a concept called layering.  With layering, you are deliberately looking for a scene with a strong foreground element, but also one that has fantastic depth to it as well.  I’m specifically looking for a repetition of patterns that go deep into the scene.  In this case the wildebeest themselves are the patterns, with those recurved horns being dominant. 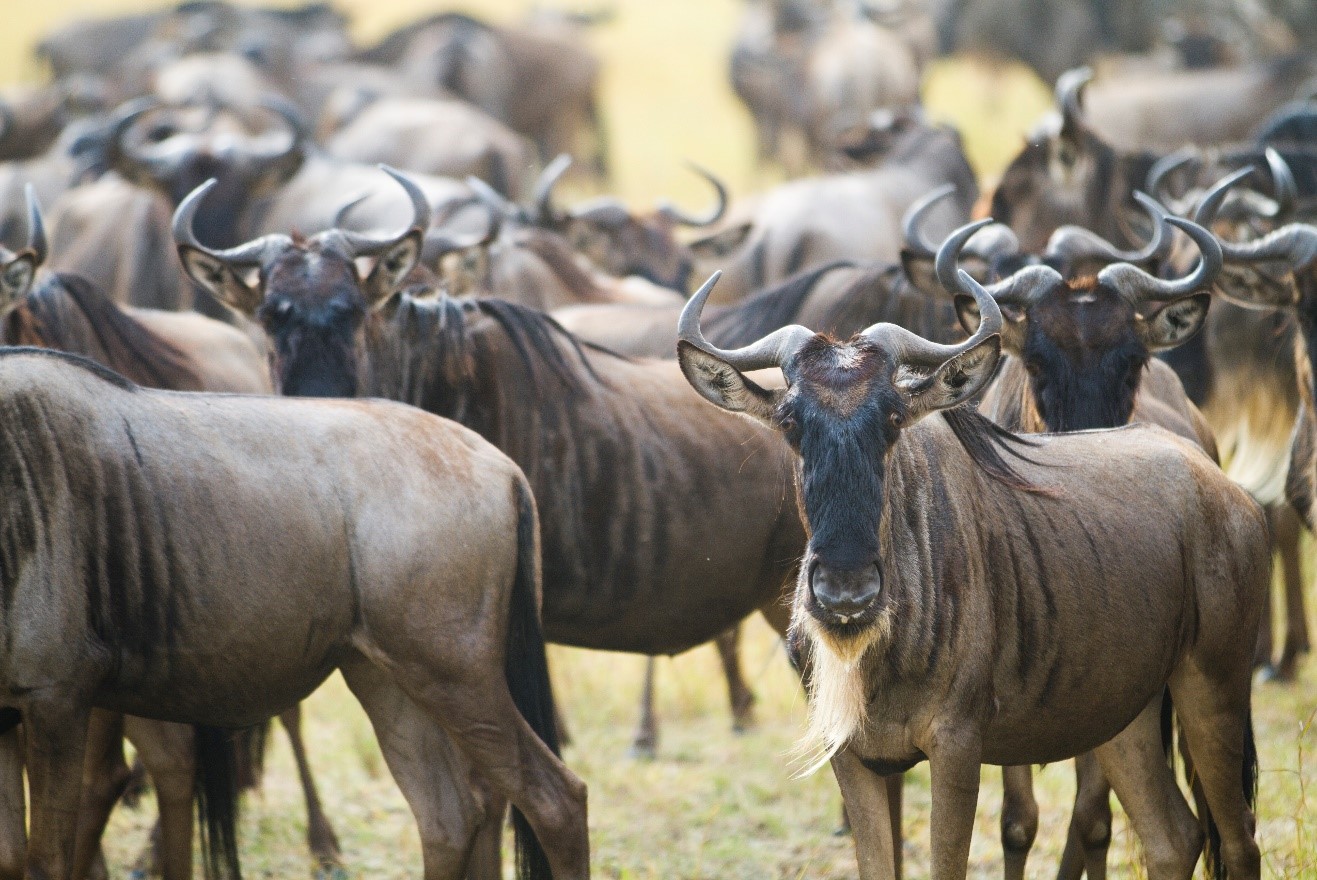 The foreground element gives you the poignant, visually appealing photo (vs. just lots of wildebeest-shaped dots) and the depth speaks to the sheer volume and number of animals.

And what’s great, is that you don’t necessarily need to have thousands of animals in your scene.  You simply just need to be able to fill the frame with these layers of, in this case, wildebeest.

Notice how in the below photo the foreground isn’t necessarily as strong (wildebeest with their back towards us) but the background is very compelling, with the horizon packed full of blurred out wildebeest from edge to edge. 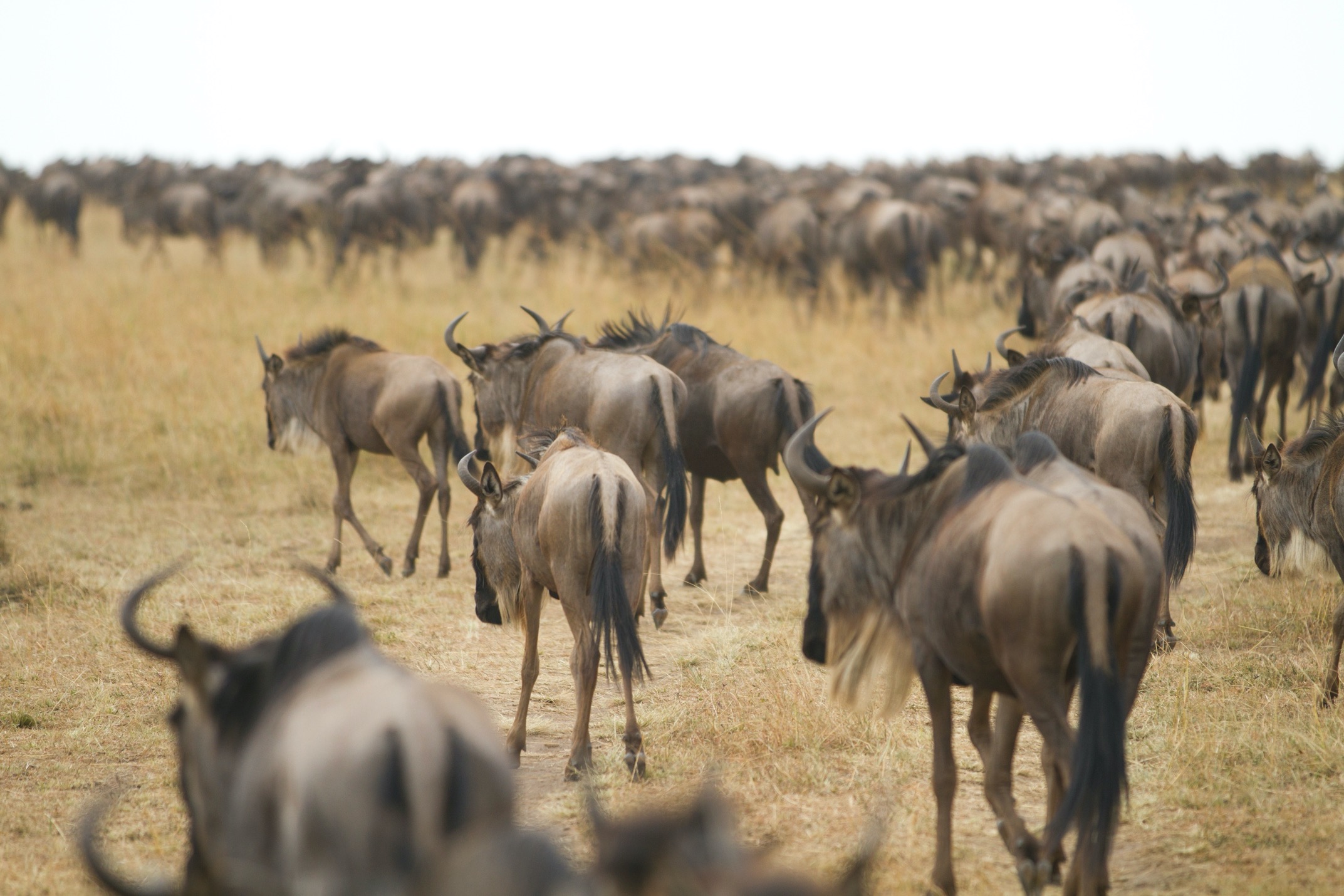 It’s worth experimenting with various apertures, which correspond to various depths of field.  Some situations call for a shallow depth, like an f/4 or f/5.6, while others benefit from a deeper focus, like an f/8 or f/11.  It’s very hard to tell which is best in-camera, or in the viewfinder, so I recommend trying both for each scene you encounter.

Another tried and true tactic is to change your perspective on the wildebeest herds.  And the best way to do so is to get into one of the iconic balloons that glide over the Mara and Serengeti ecosystems at dawn each day. 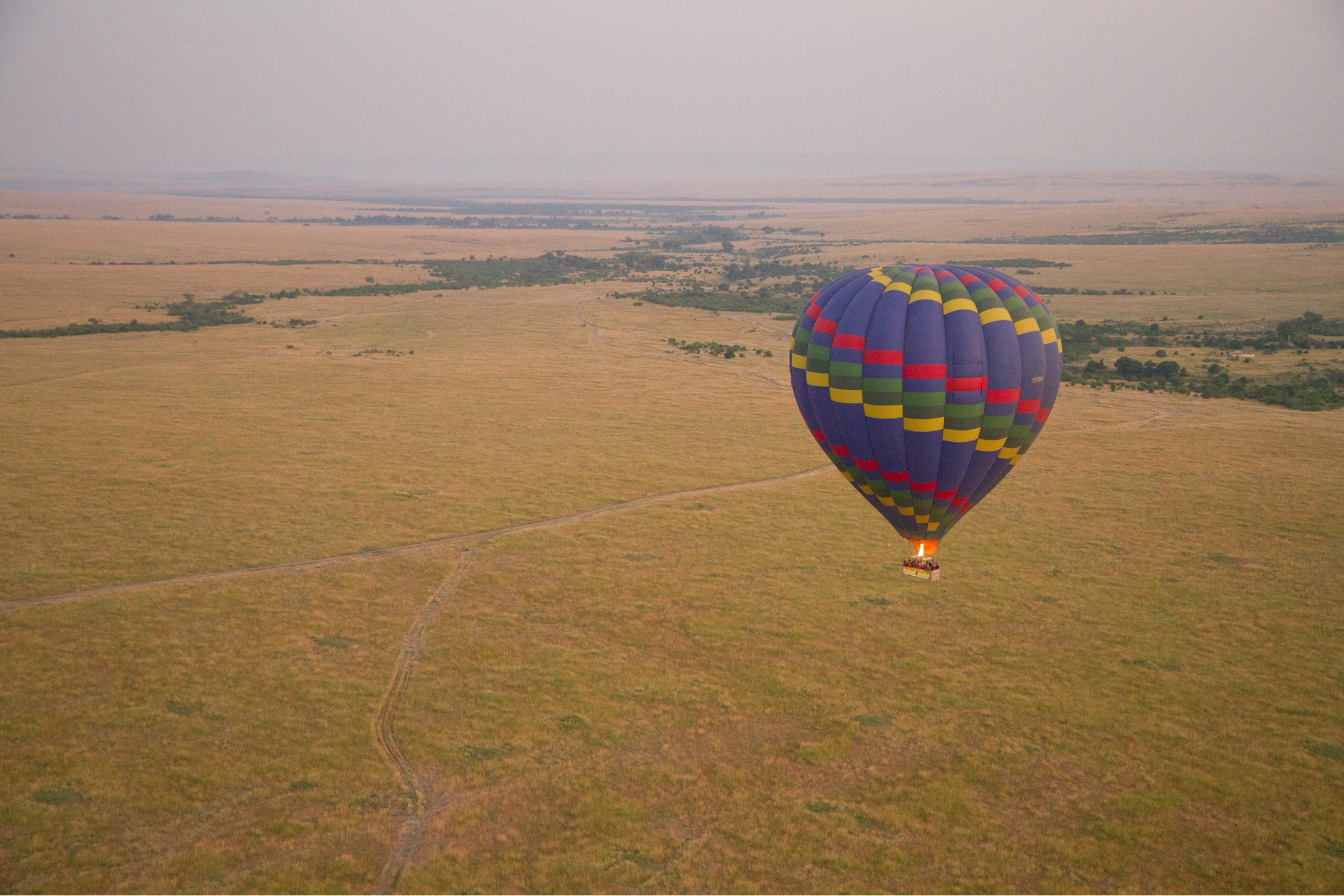 Providing both high level and mid level photo opportunities, the steadiness of these balloon safaris is uncanny, as you float like a cloud over the ecosystem…as quiet as can be. 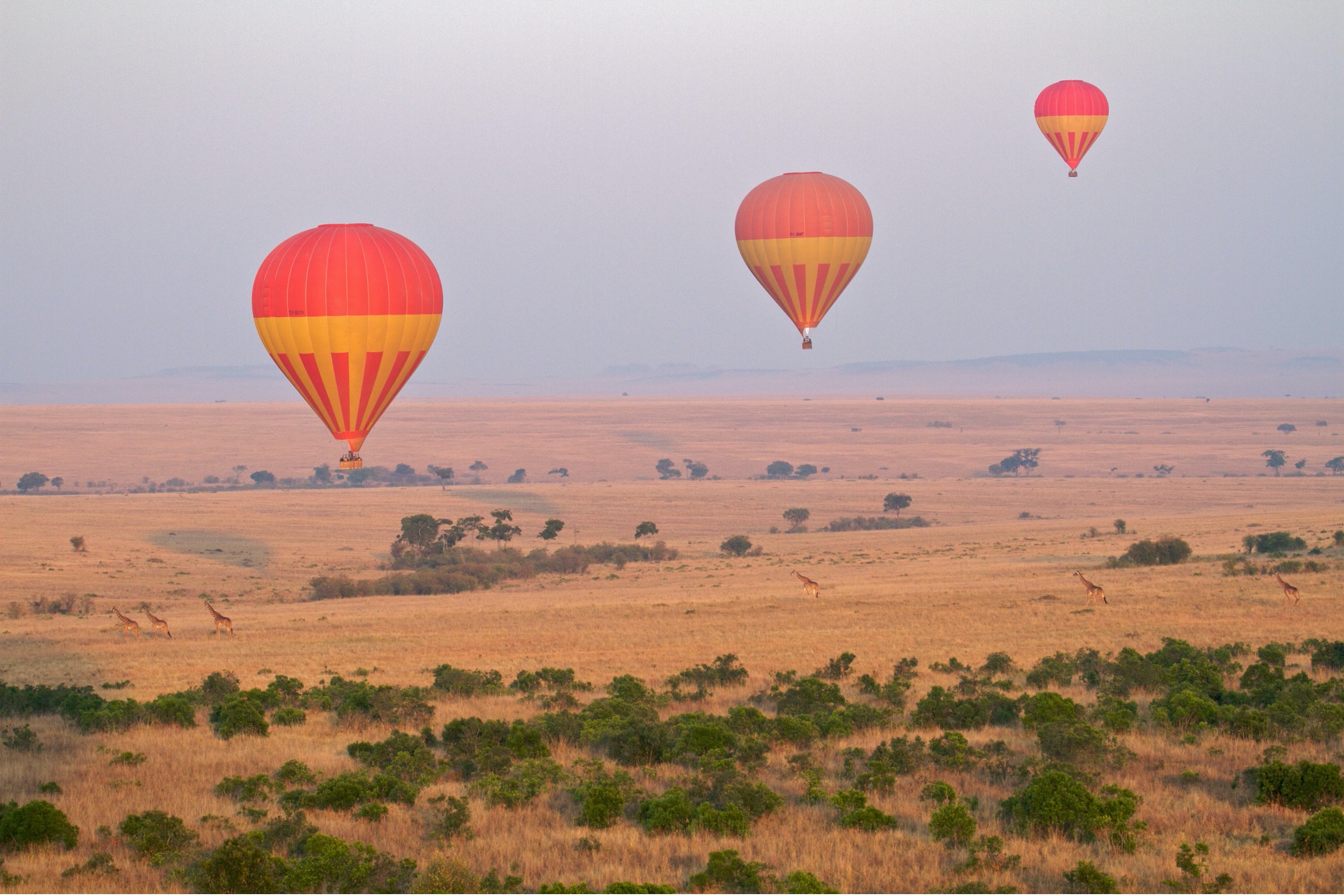 Simply put, by changing your perspective, you are able to get a greater angle with which to photograph the sizable herds that may just not otherwise be photogenic from the ground.

Notice how in the above photo, just that slight elevation creates for an altogether different sense of depth and scale to the great migration.  Yes, they are still basically dots on a landscape, but because of the added height, you get lots, and lots, and lots more dots!

This goes back to more of a “documentation” style photo, but I believe it adds another angle, literally and metaphorically, to your photography on such a photo adventure.

Show motion, both fast and slow

Harnessing the power of motion, and more specifically your camera’s shutter speed, is a core tenet of great photography.  It injects a dimension of art and creation that is all in the hands of the photographer.

The most usual way to harness shutter speed with moving animals is to “freeze” motion by ensuring you have a fast-enough shutter speed.  For walking or trotting wildlife, something between 1/500 and 1/1000th of a second is where you want to be.  However, for wildlife at full speed, you may need to increase this to 1/1500, 1/2000, or higher to really freeze motion.

Trust me, this can result in great photography. 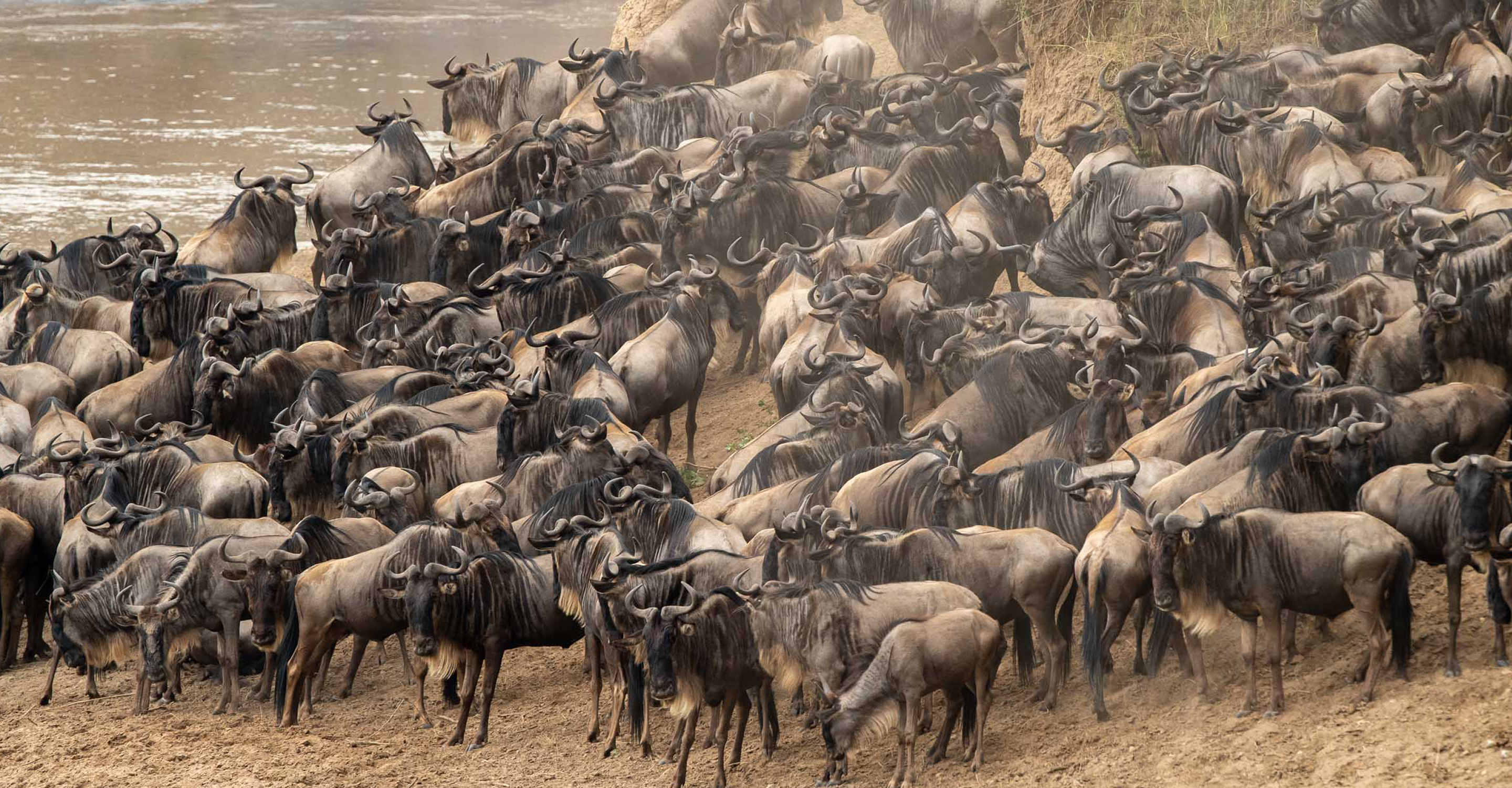 However, an alternative way to harness your creative potential via shutter speed manipulation is by slowing it down. That is, taking photos with deliberately slow shutter speeds. 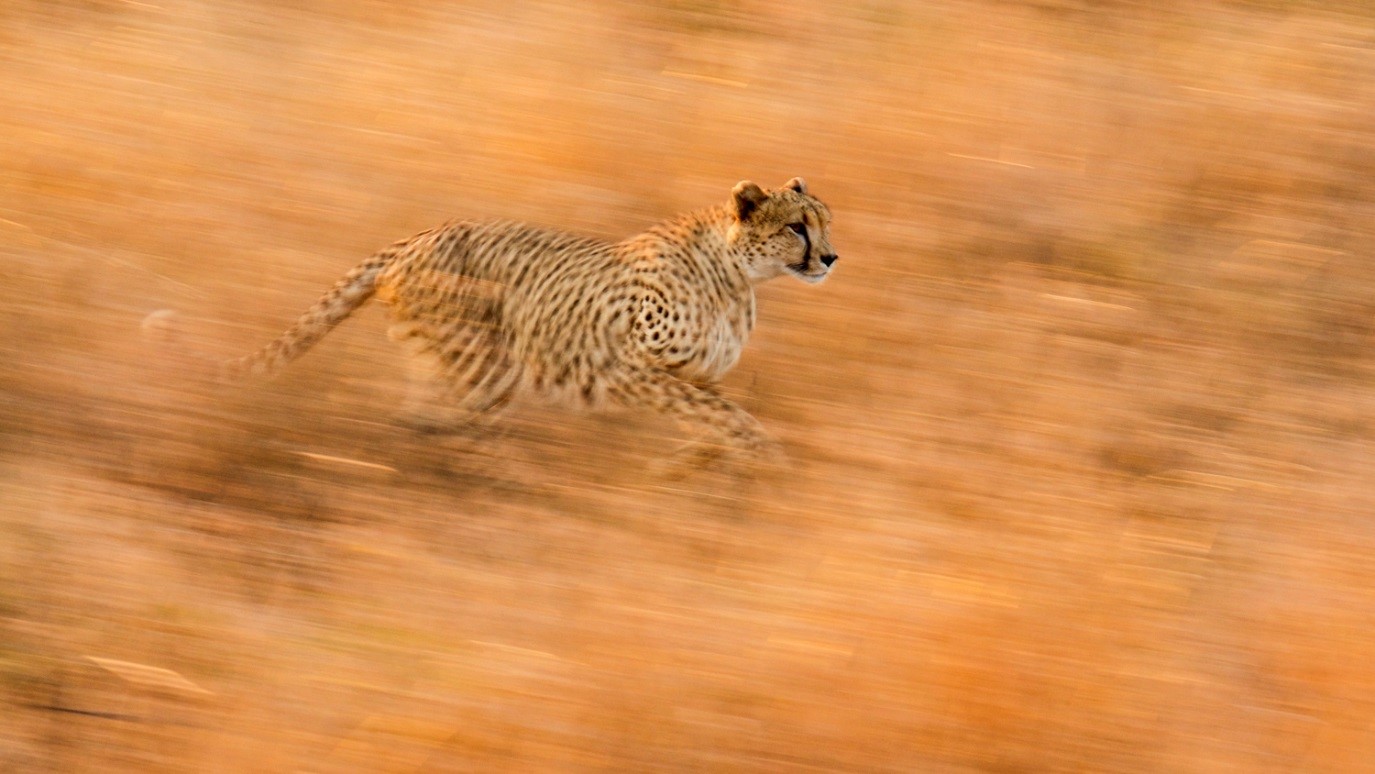 Sure, this usually results in blur, and if you’re not careful, it could result in the entire photo being blurred, rendering is virtually useless.

But if you are able to keep an eye out for the right scene, hold your hands and camera reasonably still, a 1/40, 1/60, or 1/80 shutter speed can produce some spectacular results.

Pro tip: try and steady the front of your lens on a seatback or handrail of your safari vehicle to add a little extra stability…you want to feature the animal’s motion, not yours.

The greatest part about playing with shutter speeds is that you will not only get great, artistic shots of safari wildlife, but you’ll also get unique shots…shots that most people simple don’t have, because they are trying to freeze motion each and every time.  Be like Apple…think different. 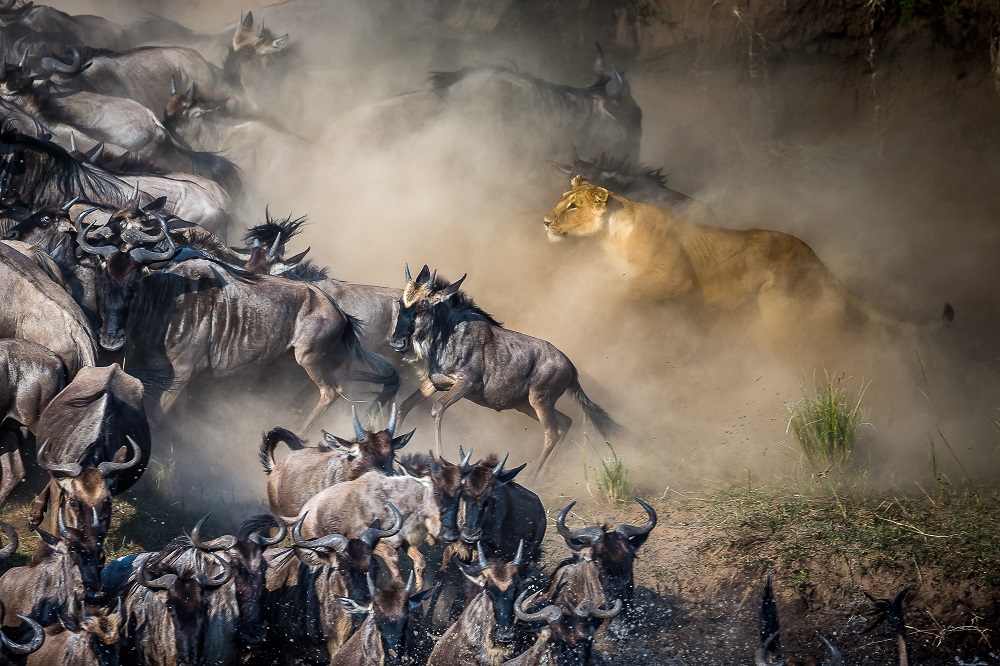 So there you have it, three tips that will get you classic, stunning, and unique photographs of one of the world’s greatest migrations.

If you’ve been to Kenya or Tanzania to photograph the migration and have tips to share, please do leave a comment below!

Landscape Photography tips for the Deserts of the American Southwest