My passion for photography began more than 20 years ago, before digital SLRs, with coursework in photojournalism.  The drive to document what I see and the constant challenge to present it in new or interesting ways means I always carry my camera.  I enjoy the solitude that photographing nature brings and love the post-production editing of my images, where I can push myself creatively.

Nikon’s new mirrorless camera, the full-frame Z6, has the potential to revolutionize capturing wildlife.  The Z6 replaces traditional mirror and optical viewfinder with a high-resolution electronic viewfinder (EVF) which creates a cascade of benefits for the photographer.  First, the EVF displays a zoomable high resolution live preview of what the final image will look like – complete with any adjustments made for exposure compensation, depth of field and white balance.  Low light shooters in particular will appreciate the bright EVF for focusing and composition.

The Z6 features a 24-megapixel sensor capable of capturing 12 fps with excellent low light performance on its standard ISO range of 100-51,200. The camera has a solid grip, a high level of weatherproofing and a button layout and menu system that will be an easy transition for current Nikon users.

Perhaps the biggest advantage of the Z6 is its move to the new Z mount system.  A sensor that is much closer to the mount opening allows for better performance with newly designed lenses – higher quality and larger aperture – though most of these new lenses are years from production.  As such, the Z6 can handle any existing AF-S style lens (and comparable third-party lenses) via the FTZ adapter.  Utilizing the FTZ adapter adds considerable bulk and weight to the Z6, making it much more comparable to the size of a traditional DSLR.

To test the Z6, I headed out to a few locations – Huntley Meadows in Alexandria, VA and Conowingo Dam in Conowingo, MD – which offer great opportunities to capture birds in a variety of settings. My lens for each of these outings was the Sigma 150-600 Sport, which was frequently used with a matching 1.4X teleconverter for extended reach.

In the hour after sunrise, I found the camera and lens (without the teleconverter) very frequently hunting for focus, even on stationary subjects.  There are few things more frustrating in photography than seeing your composition slowly shift in and out of focus repeatedly as autofocus struggles to lock on to what your eye can clearly see.  Ironically, this experience is made more painful by the beautiful EVF, which even in low light shows a vibrant bright beautiful image.  The EVF is actually one of the strongest selling points for this new camera.  The ability to see a life histogram and monitor exposure changes in real time for those shooting in manual mode.

When I was able to acquire accurate focus, I was very impressed by the quality of the resulting image.  I was able to bring the ISO up to 8,000 to maintain a fast shutter speed as I attempted to photograph a pintail taking flight.  Over the duration of a less than 3-second take-off sequence I was able to take 25 photos, utilizing the Z6’s 12 frame/second burst mode.  And although autofocus struggled to track the bird more than I hoped, I was able to grab a handful of keepers like this one below.  (The high ISO performance of the Z6 is incredible; I was regularly amazed by the detail I could recover from underexposed images in post-production.) 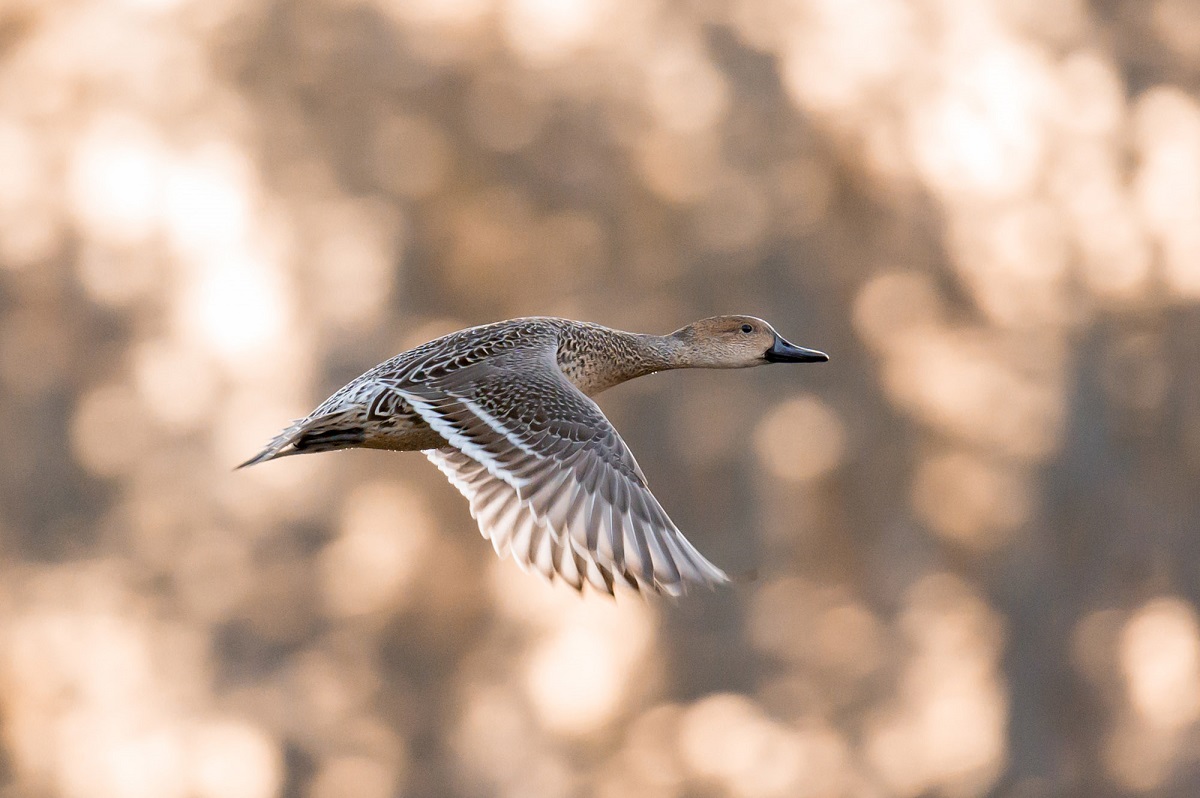 Subsequent Pintail takeoff sequences were less successful with a fewer percentage of in-focus shots than I am accustomed to with my full frame Nikon D600 (now 6 years old).

With more stationary subjects, the Z6 really shines.  When mounted on a sturdy tripod, a long lens becomes a powerful spotting scope with the ability to zoom in using the EVF, the same way you might in Live View for precise focus.  Using this highly magnified view and thumb joystick is a relatively easy way to ensure pin-point focus (at least until your subject moves).  The juvenile Red-headed woodpecker storing nuts in a tree below provided ample time for a well-focused shot. 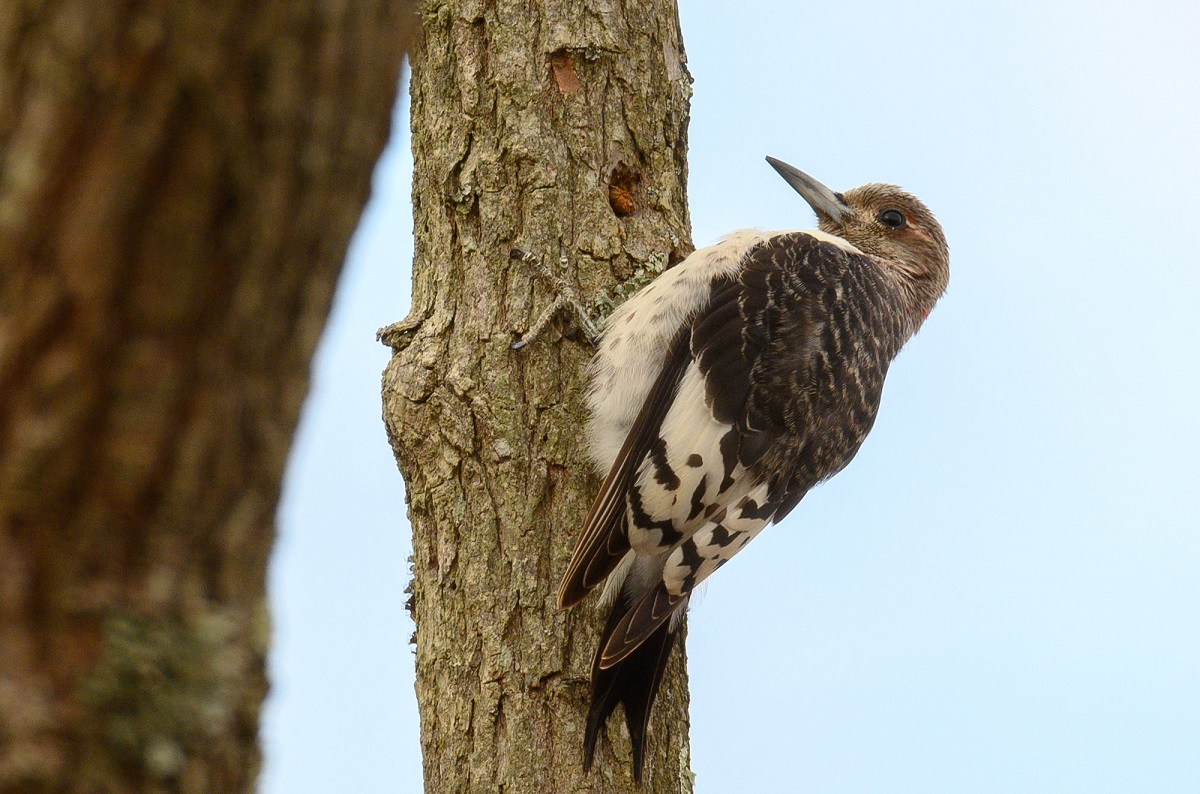 One of the major benefits of the mirrorless format is that lenses and bodies no longer need to be fine-tuned/micro-adjusted for optimal focusing sharpness.  With mirrorless cameras the imaging sensor is now responsible for focusing (instead of a dedicated autofocus sensor in DSLRs), so lens/body calibration becomes redundant.  The downside of this improved accuracy is unfortunately autofocus speed.  The importance of this feature, however, cannot be understated for wildlife photographers who love to shoot with big lenses at small apertures where small misalignments can ruin a photo. 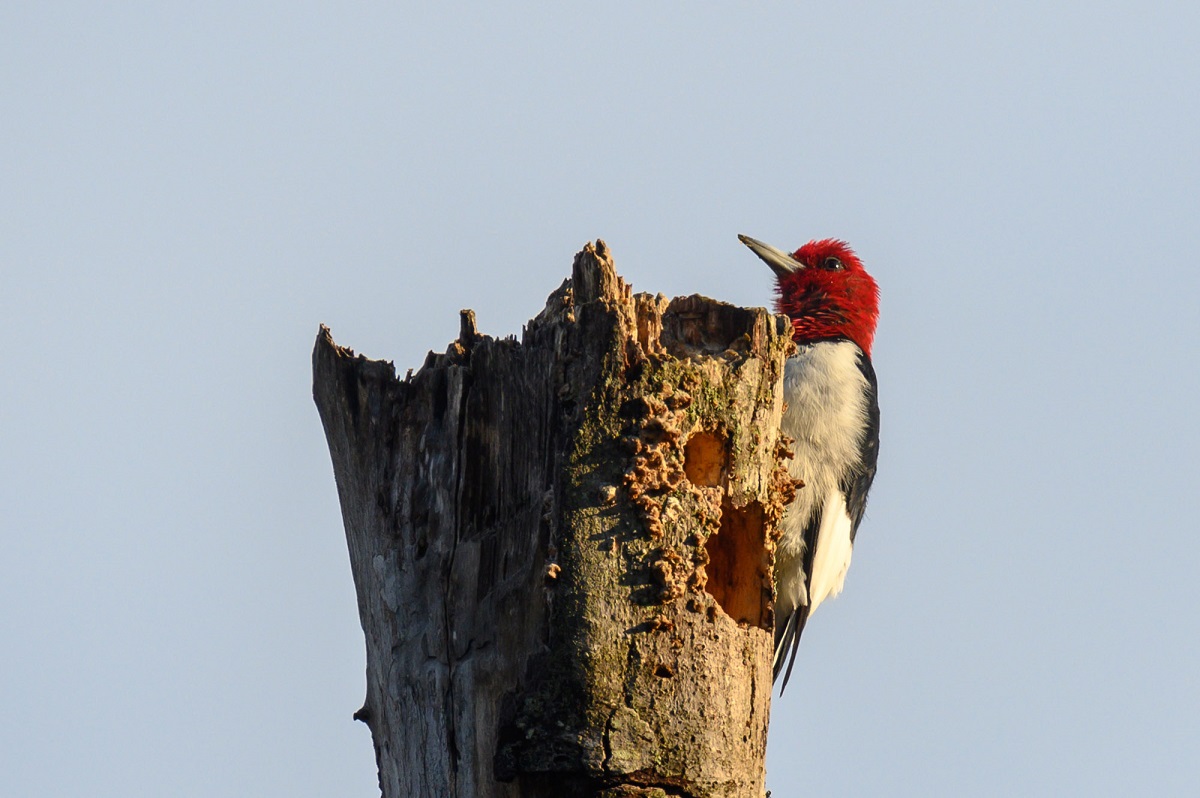 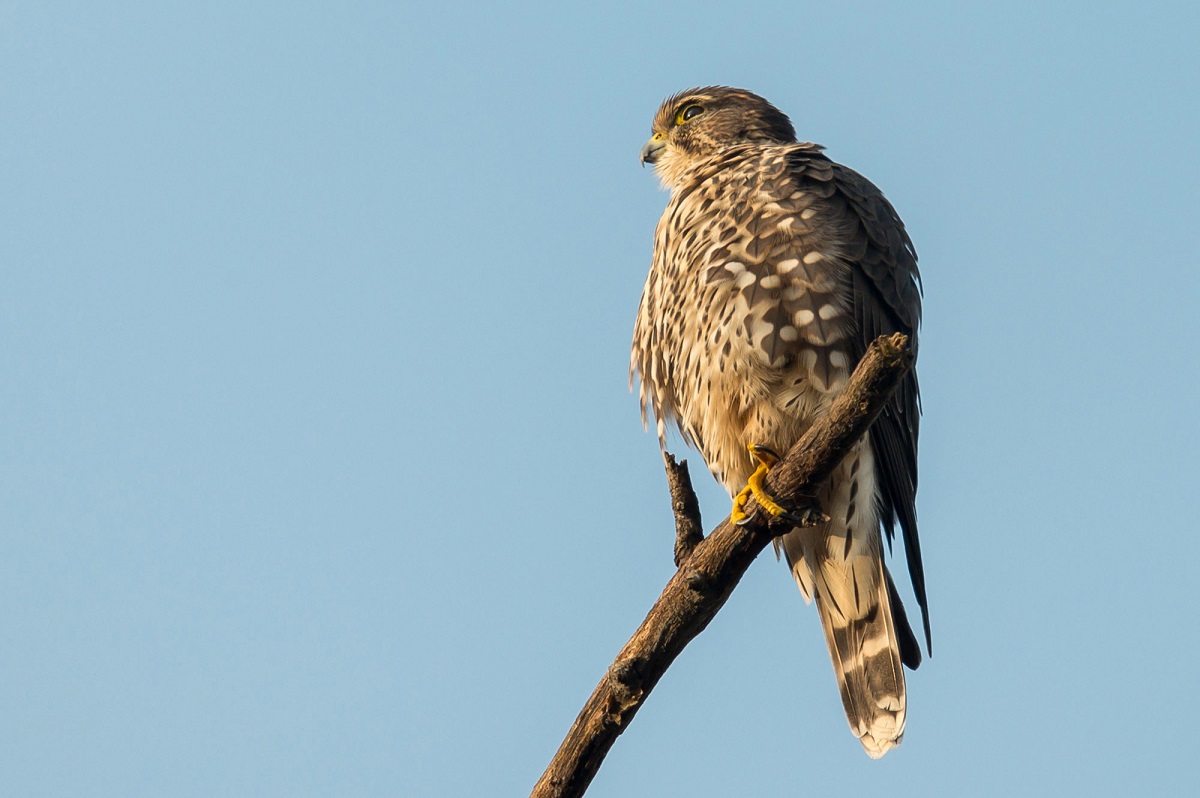 The Z6 is the first Nikon camera that can shoot 4K video across the entire width of the sensor.  This allows full usage of wide angle lenses.  The video mode features are quickly accessed by the flip of a switch and retain their own exposure settings as well as a customizable menu of settings, independent from photo mode.

The video autofocus modes are a significant upgrade over most SLRs with caveats that the subject must be relatively slow moving and not stray too far from the center.  Fortunately, I came across just such an accommodating subject when I spotted a river otter swimming towards me.  I immediately fired off shots in a quick burst and then flipped a conveniently located video switch and was instantly in video mode.

Shooting videos with the Z6 is the best such experience I’ve ever had.  There are separate memory settings for photo and video, which is immensely helpful as the proper exposure settings between the two generally vary significantly.  While the 4K video capabilities of this camera will appeal to wildlife photographers interested in dabbling in video, my favorite feature is the ability to shoot full HD video at 120 fps.  This feature has the capacity in the right hands to produce truly stunning sequences.  The fact that accessing this feature can be accomplished without removing your eye from the EVF shows that Nikon has focused on making the Z6 a powerful tool for photographers and videographers alike.

Although I did have some trouble keeping the continuous autofocus trained on the river otter’s head, when filming at 120 fps, the camera only needs to maintain focus for a relatively short amount of time to get a full-length clip – something even an amateur like myself was able to do while tracking at 840mm with a 1.4X teleconverter.  Nikon has promised a firmware update to autofocus on the subject’s eyes – a welcome feature if implemented well. 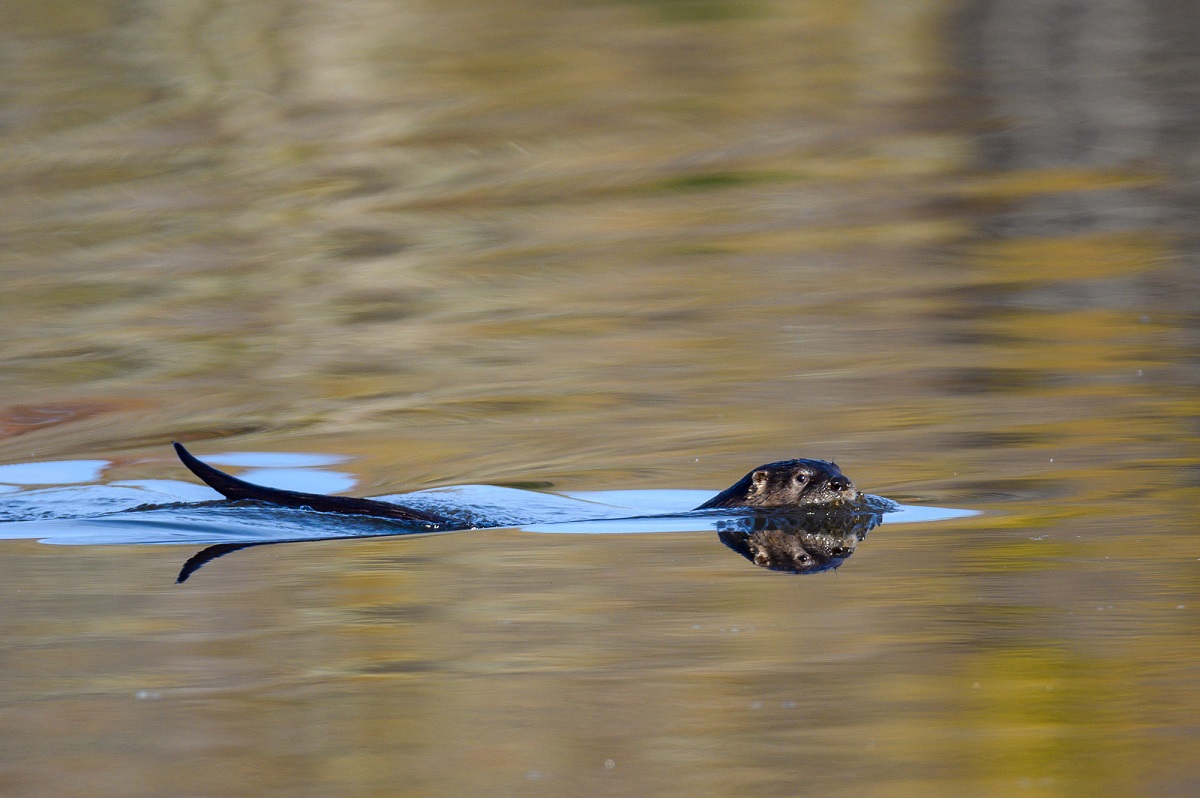 Continuous autofocus in photography mode is the major struggling point of this camera.  Regardless of the autofocus mode selected, it just cannot keep up with fast moving subjects.  This is not an issue associated with the relativeness slowness of the Sigma 150-600 Sport lens, I experienced it with the 70-200 VRII f2.8 and 50mm f1.4 lenses, too.

I tested the autofocus with ducks which tend to fly in relatively straight lines as well as feeding gulls, which move more haphazardly.  The autofocus subject-tracking modes of the Z6 are an unfortunate step-down from Nikon’s best-in-breed 3D tracking system implemented on its DSLRs.  Although I managed a handful of keepers on the Z6, I felt like I was constantly fighting with a system that was too slow for my subjects that day.  Even after hours of practice and experimenting with the subject tracking settings, I could not improve my keeper rate. 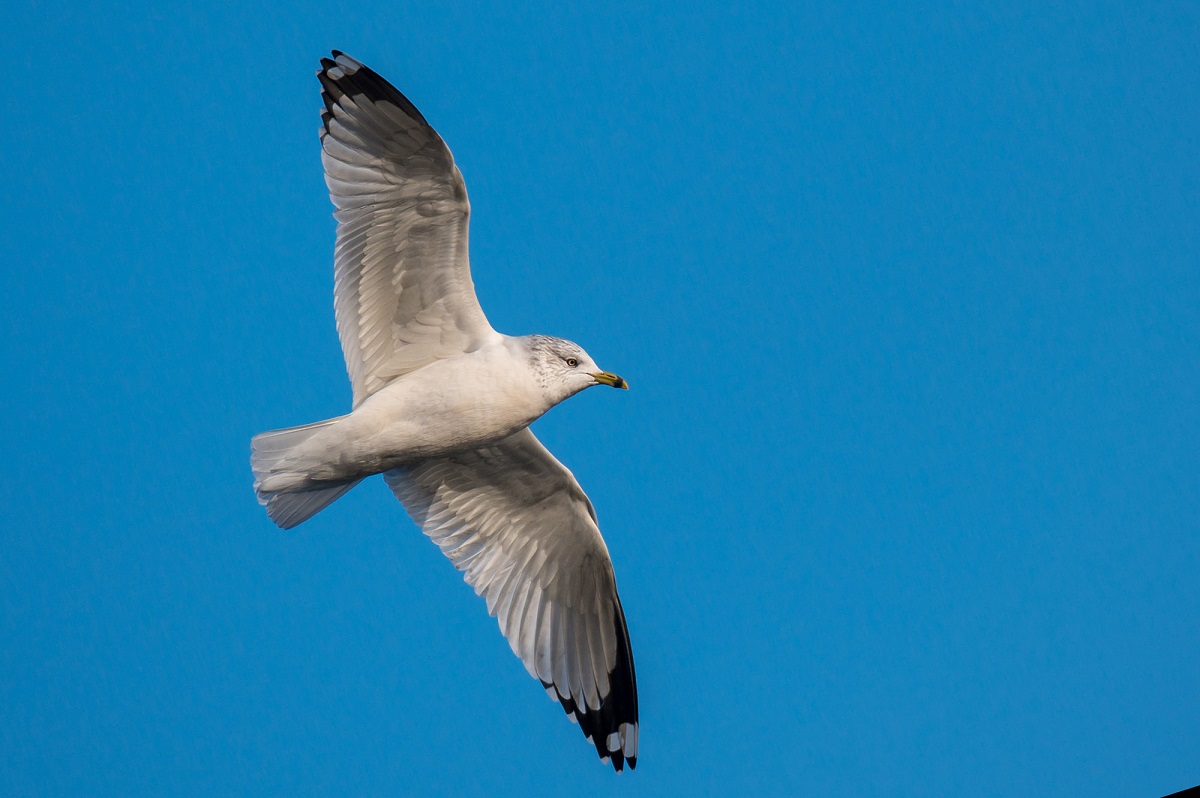 The Ring-billed gull and Great Black-backed gull were both fast-moving subjects and the images below represent the sharpest images from a series where the majority were unacceptably out of focus.  While some of this falls on the photographer’s shoulders, a disappointingly high amount is also the result of the Z6 not being up to the task. 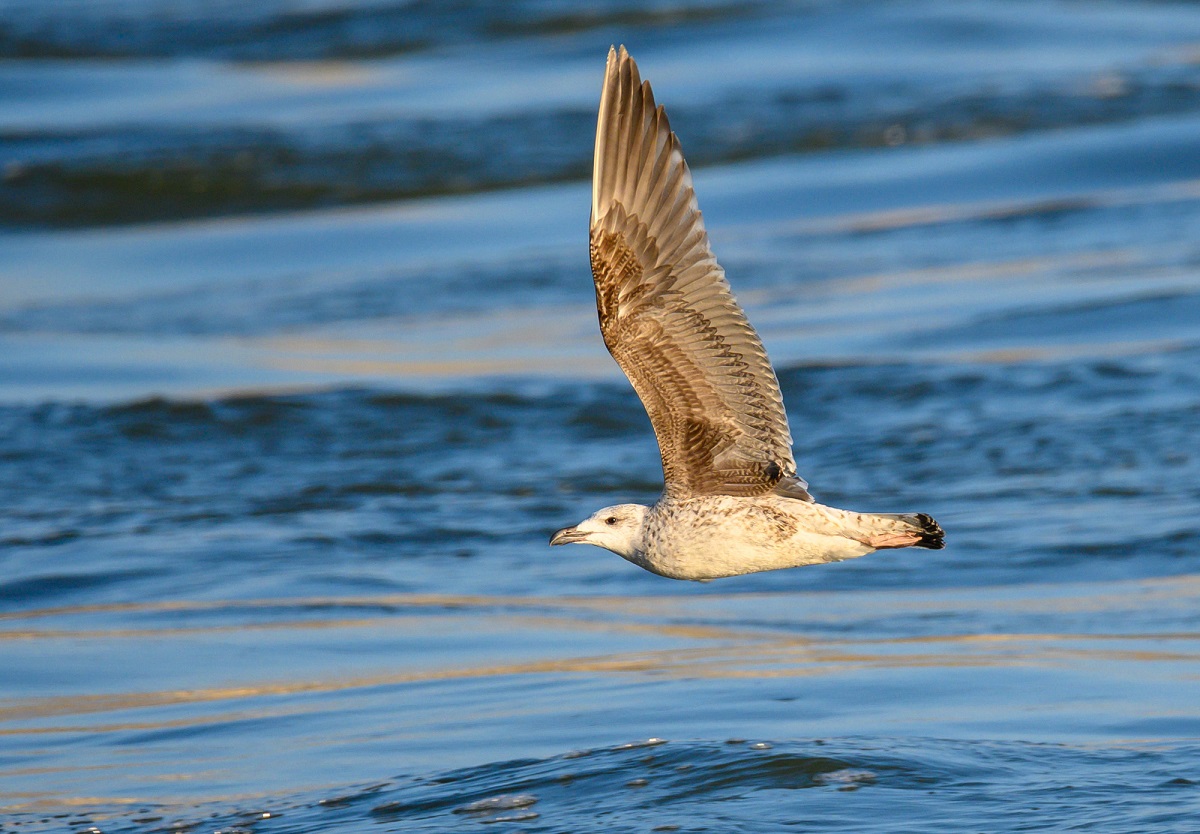 Changing lenses exposes the sensor to dust much more significantly than with a DSLR where the mirror serves as a significant protector.  I noticed dust specs appearing on my images after switching lenses just a handful of times over a couple of days – something that took months to occur with my DSLR.  Additionally, on the negative side, the single card slot has the potential to be very frustrating for some photographers.  The battery life was better than I expected, with a single fully charged battery capturing about 700 images and 10 minutes of 4K video on each outing.

In summation, the Nikon Z6 is a brilliant first step into mirrorless for Nikon, and most photographers will find it an easier to use camera than their existing DSLR.  The silent shutter, fast frame rate, beautiful EVF, and compatibility with most existing lenses should merit a strong look for existing Nikon photographers.  Wildlife photographers who rely heavily on fast, accurate, continuous autofocus tracking small or fast-moving subjects may not be able to forgive this camera’s main shortcoming and may be better served waiting for the second generation of the mirrorless camera.

Underwater Photography in the Galapagos Islands

Great article. Wondering if you would lend some advice? I have a Nikon D5300 body that I’ve been using with a Sigma 150-600 mm contemporary lens. If I purchase the z6 will I be able to use my Sigma lens without a teleconverter? I have never purchased or used the docking device for my sigma either. Would I need to but that and upgrade anything on that lens? You mentioned it was hard to get a focus at first. Would this be a serious issue? I do a lot of wildlife photography. Thank you for any assistance.

hi Sheila, thanks for writing and great question! You will almost definitely need some sort of adapter to go from a Nikon DSLR mount to the Nikon z6 mirrorless mount. However, from what I’ve heard, they do not negatively affect the image and work quite well. You’re adding in one more element to this, which is a 3rd party lens, which could cause some issues. In theory, it shouldn’t, and if it does the docking device should solve those problems. However, Nikon offers no guarantees, since they really want you to stick with their Nikon brand lenses :). At the end of the day, I can’t say for sure this will all work out fine, as there is always a bit of head-butting between sigma (as well as other 3rd party lenses) and the main brand itself. Nikon just doesn’t want to do any favors for 3rd party lenses, so there is woefully little info or guarantees out there. However, the way I see it a) you will have to buy the DSLR to mirrorless mount adapter for your lenses anyways (to adapt all your DSLR lenses to the z6) and b) worst case scenario you buy the USB dock for the sigma lens for about $50 if you’re running into issues. I hope this helps a little!

hi Ed, I’m not able to reach the author of this post, but in my experience the Tampon 150-600 is a great lens at a great value. The only real downside is that it starts off at f/5, which isn’t all that fast for 150mm. And at 600mm it’s f/6.3, which may be difficult in low light conditions. However, cameras like this z6 and other newer cameras have great iso sensitivity, so these apertures may be just fine. Again, to get this range at less than $1500 is a great value and I’ve heard nothing but good reviews from this lens. I’ve shot next to people using it in Borneo on several occasions and all came away with stellar shots.