If you’ve been reading for a while now, you’ll see that one of my absolute favorite types of photos is the “wildlife in landscape” shot.  And when it comes to the best, most spectacular wildlife in landscape shots, it’s hard to beat Alaska—it’s the holy grail of both big wildlife and big landscapes.

There is one particular area that I’m evermore enamored by, and this is the bear coast, encompassing the area of Katmai and Lake Clark National Parks in South Central Alaska. Not only is it home to a staggering number of spectacular coastal brown bears (aka grizzlies) but the landscapes are out of this world…just wild and rough and beautiful in all the right ways.

In this article, we’re going to dissect all the ingredients to this iconic shot, taken from Nat Hab’s Bear Camp, located as a private in-holding in the magnanimous Lake Clark National Park—brown bear heaven.

Follow along for a step-by-step guide on how to nail the shot below and capture an amazing bear in Alaska landscape photo on your next Alaska photo adventure. 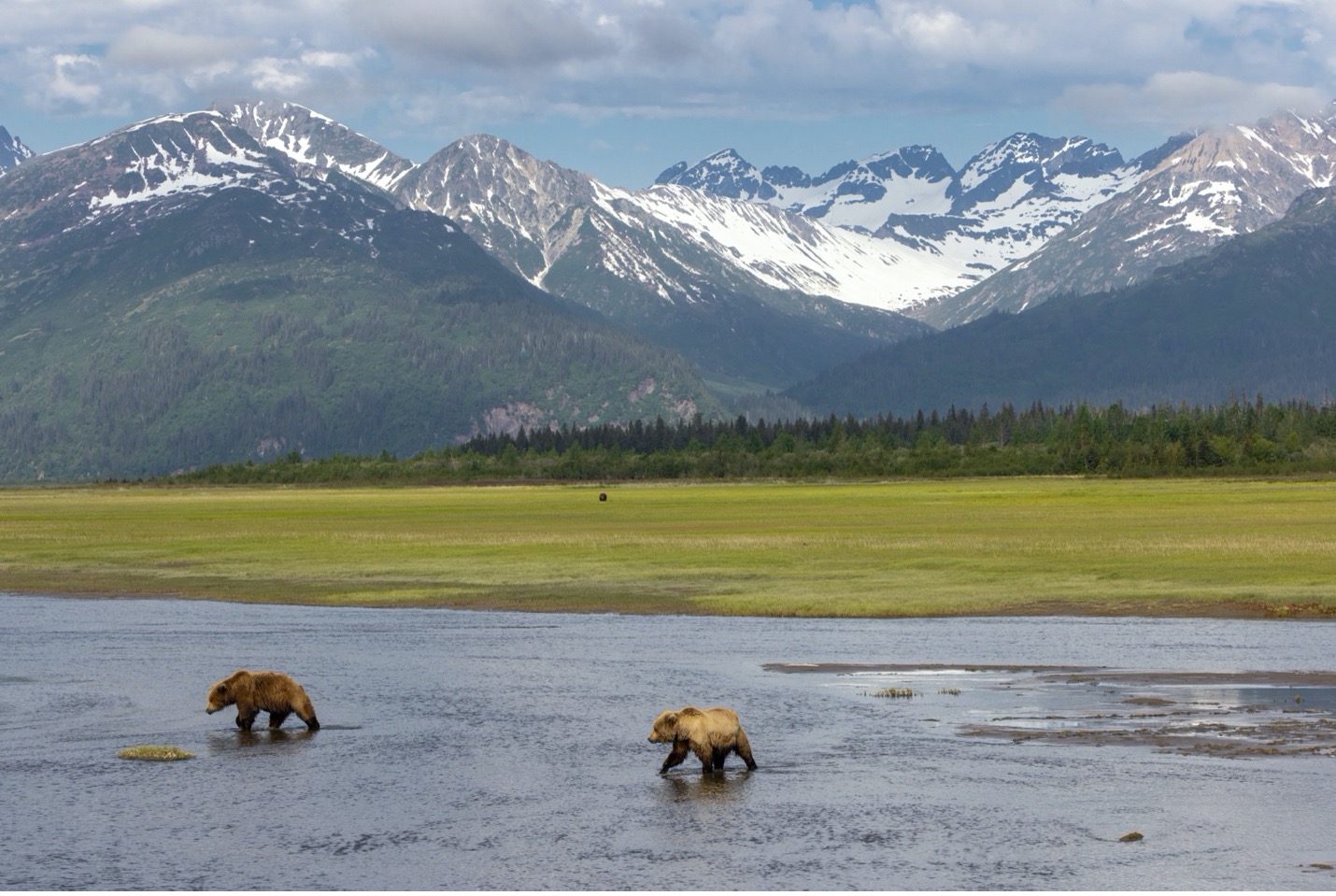 Getting in front of bears

The first step of course is how in the world are you going to get in front of the world’s largest grizzlies to photograph them.  Well, location is key, and the Bear Camp in Lake Clark National Park is one of the best.  With its multiple viewing areas and close proximity to a population of over 100 bears (in the immediate vicinity) you are very likely to see many, many bears in a few days time.

Timing is also important.  The season runs from May through September, with early season displaying the exquisite snow-capped peaks, but later season offering a bit of fall coloration—both are stupendous times.

The advantage of bear specific photo trips is that you often have multiple viewing platforms and angles you can use to safely and closely observe wild bears, exhibiting no pressure or influence on them…thus you can capture 100% natural behavior. 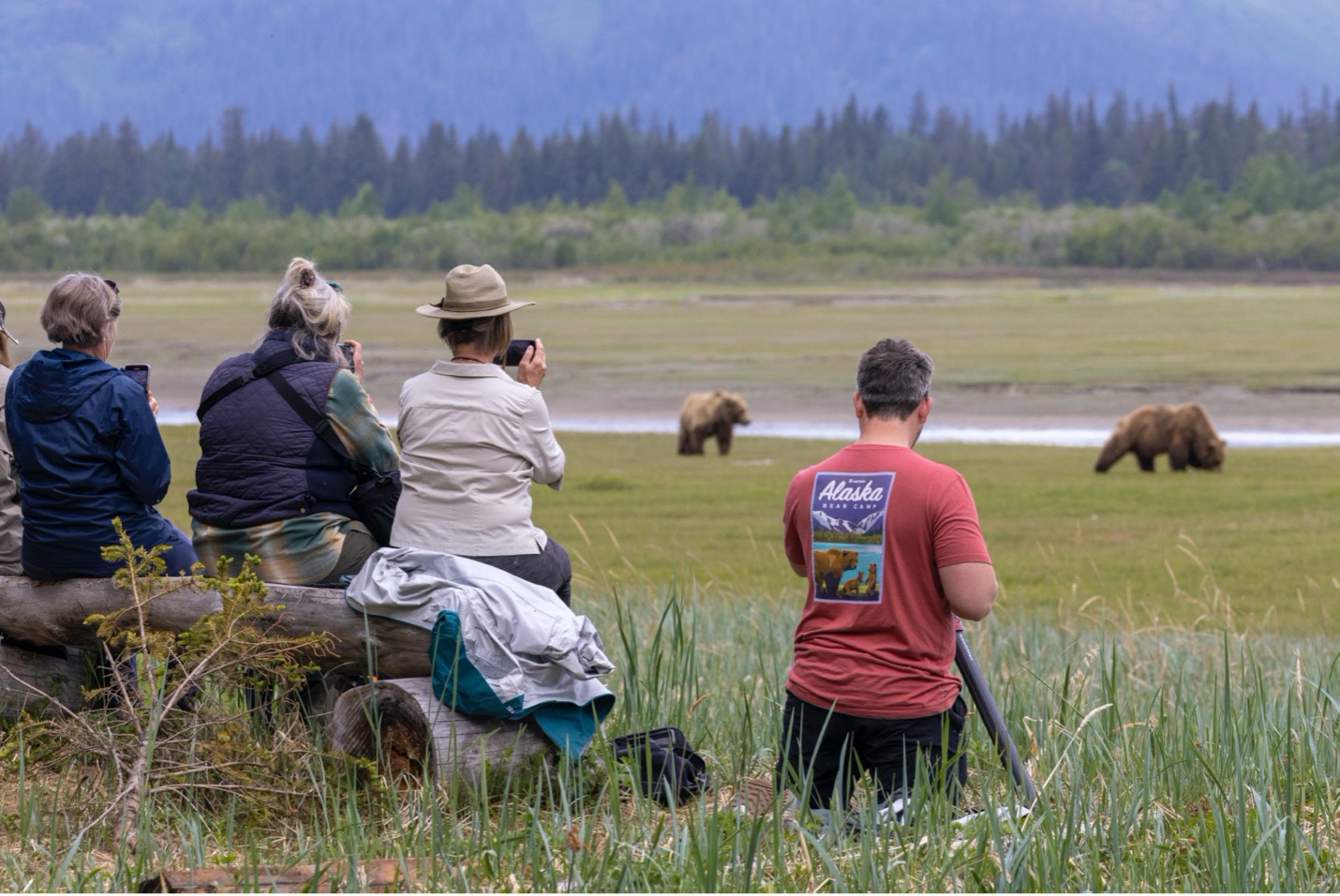 Camera settings for wildlife and landscapes

In order to feature both the bear and the spectacular backdrop, you are likely going to want a wide depth of field so that nearly the entire scene is in focus. Technically you could still try for classic “wildlife portraiture” and have the animal in focus with the background blurred, but that’s really not the magic of this type of shot.

To get everything in focus, I’m really aiming for an aperture of f/11.  You could technically stop at f/8 and do pretty well, and you could try and get even more in focus with f/16, but there are drawbacks to that as well (most notably lens diffraction, not to mention the need for a higher ISO).

Fortunately, when bear viewing in Alaska, you are usually not limited by light.  The days are long, and even with cloud cover, there is quite a bit of light to work with.  Thus, I’m able to get a shutter speed of 1/320 and a moderate ISO of 400 or maybe even 200, all while maintaining that f/11.

The reason I’m shooting at such a “slow” shutter speed (well, slow for normal bear photography) is that this is indeed more of a landscape photo.  The bears are relatively small parts of the scene, and thus any sort of normal movement from walking has less of an impact.  The bigger the bears are in my scene (i.e., % of the frame they’re taking up) the faster I want my shutter speed.  1/320 is a great starting point, but if you review your photos and begin seeing a bit of motion blur, don’t hesitate to double your shutter speed to 1/640 pretty quickly.

And because this is equal parts landscape photo, make sure you are keeping that ISO low.  For big, impactful wildlife portraits it’s not as crucial, but for highly detailed pixel-rich landscape photos, high ISOs of ISO 1600 and above can add unpleasant noise and grain to your photo.

Just as with all landscape photography, the composition of your photo has high importance. Starting with traditional rules of composition like the rule-of-thirds and golden ratio is great.  However, about 10% of the time I’m going to deliberately break these rules, so don’t take them as absolute gospel.

Nevertheless, the simple tenets of “rule of thirds” will get you to where you want to be, which is an aesthetic, captivating shot. 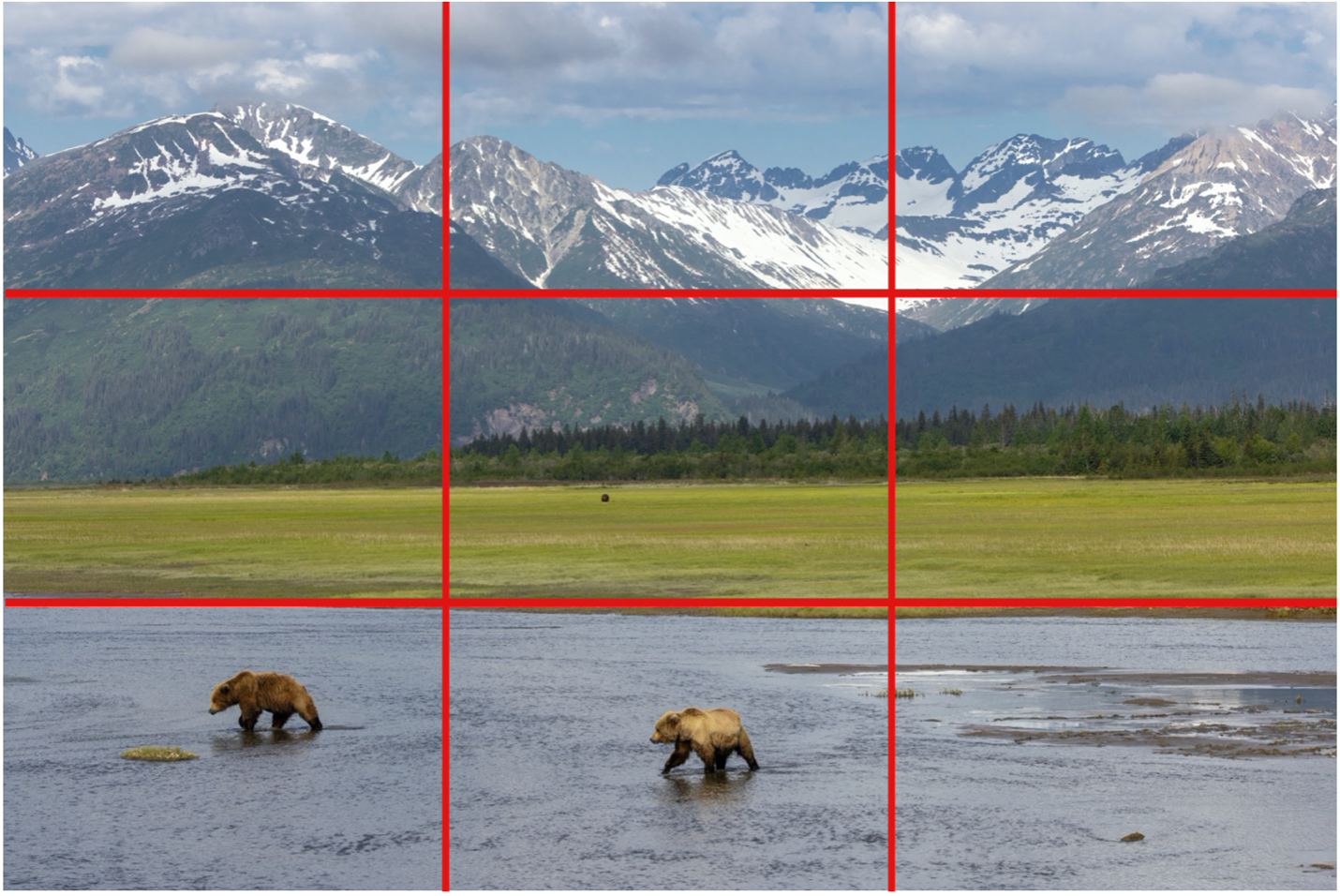 Above, notice how the bottom third contains the bears and the water, while the upper two thirds contain the meadow, mountain and sky.  This is an example of adhereing to the rule of thirds.

However, notice how I did not place the bears at the bottom intersecting points of the lines.  They’re very close, but they fall outside of it…pushed to the bottom of the scene.  This would be an example of breaking the rules, but I did so somewhat deliberately.  Oftentimes with big landscapes, pushing the wildlife/subjects outside of the core area helps exaggerate composition, which creates a feeling of vastness in the scene.

It doesn’t work all the time, but it’s always worth a shot, especially in scenes like this with such a massive landscape to show-off.

You’ll no doubt want to take as many shots as you can, but what to do once you start noticing the images being repetitive or near duplicates?  This happens often when bears are not moving and you find yourself taking the same photo from the same angle again and again.

The first variation I look at is with my focal length.  I ask myself—can I zoom in more or zoom out less to create a dramatically different photo?  This may require putting on a zoom telephoto or an ultra-wide angle, but the added time to do so is worth it, especially after you’ve already gotten your choice photos.

While the above photo may not make quite as much of an album cover as the original, it tells quite a story!  These four small dots are bears and this is what your backyard of Bear Camp looks like.  That is quite a statement piece when storytelling with friends, sharing photos online, or creating a portfolio from your photo expedition. 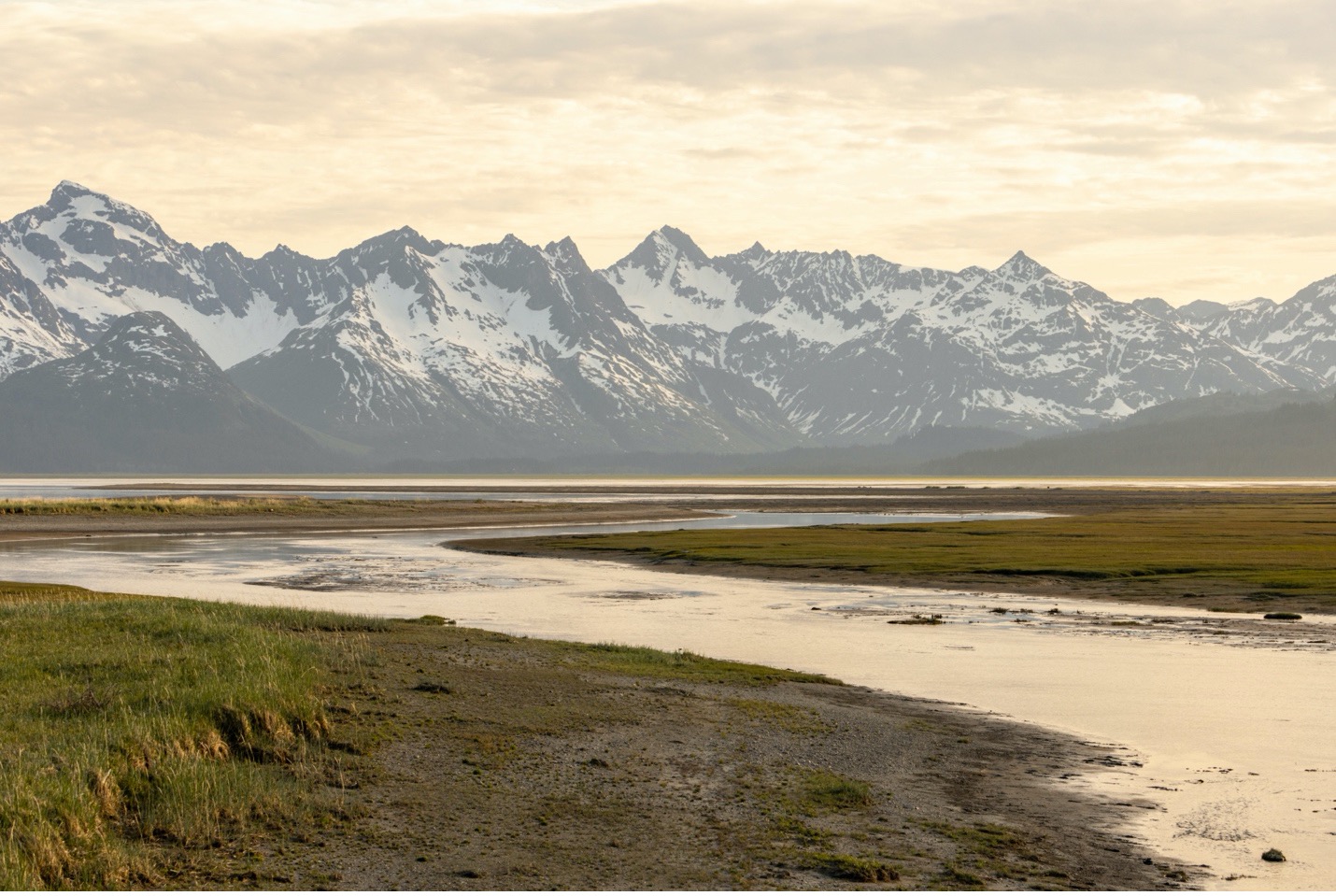 Another variation might be to experiment with different white balance settings.  By switching between daylight and cloudy WB settings, you may uncover a unique aspect to the photo and scene, especially at daybreak and day’s end.

Notice how the above photo (albeit without any bears) has a nice warm tone to it?  This is the result of the camera processing what “pure white” is a little differently and adding a warming filter to the ensuing photos.

Finally, make sure you do not miss key behaviors of the bears in your wildlife in landscape photo.  Part of this is luck, but you will increase your luck if you are at-the-ready and have burst mode set to a high frame rate on your camera.  This will allow you to take multiple photos in quick succession, which could be the difference between capturing a perfect posture or not. 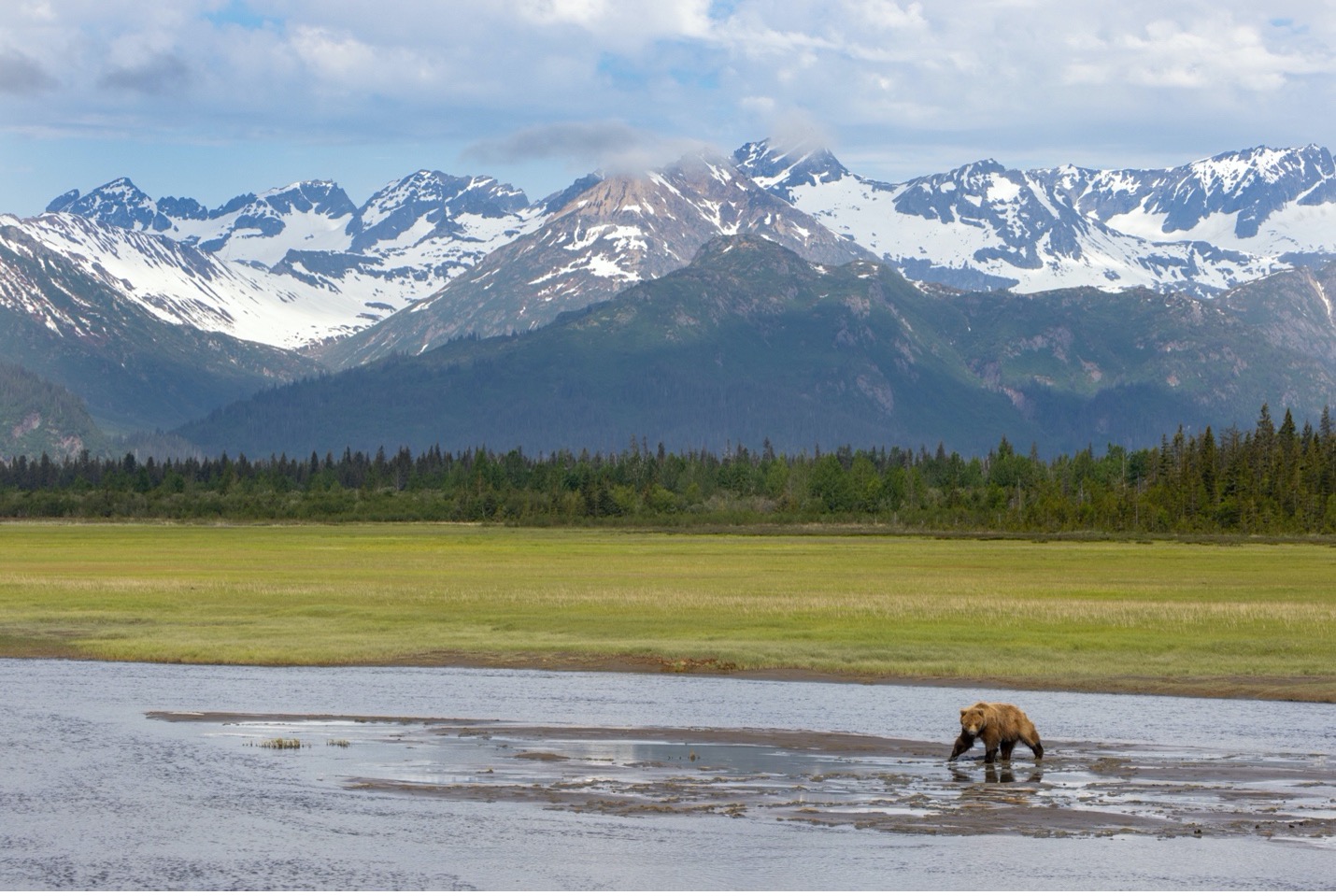 And there you have it!  Steps to capture the beauty of Alaska, the splendor of its bears, and how to maximize the variety of photos from a single position.  If you’re headed to Alaska to photograph bears, and especially if you’re headed to photograph from the renowned Bear Camp, I wish you the very best out there and hope you come hope with your new favorite wildlife (in landscape!) photos.